Yodgorlik Silk Factory is a place hidden in a maze of the city of Margilan, which is one of the oldest cities in Uzbekistan located in the Fergana Valley. Although nowadays more and more tourists come to this place, it still preserves its magical atmosphere. The choice of a location for the factory wasn’t actually accidental. Margilan was built at the crossroads of ancient trade routes. It used to be famous for manufacturing the best quality silk in all Central Asia. The factory is definitely worth visiting as it employs around 450 people, mostly women. As you pass through consequent production halls, you may appreciate the whole process of manual production of silk. It’s an arduous work but it brings amazing results. Yodgorlik Factory is not the only silk factory in Margilan, but it is the only one which still preserves the old tradition of hand-made manufacturing of silk. The other production plant is an enterprise known all over the world, able to make 2,5km of silk thread a day, while Yodgorlik makes up to 6km of silk thread a month. So, how is silk actually produced? See for yourselves… 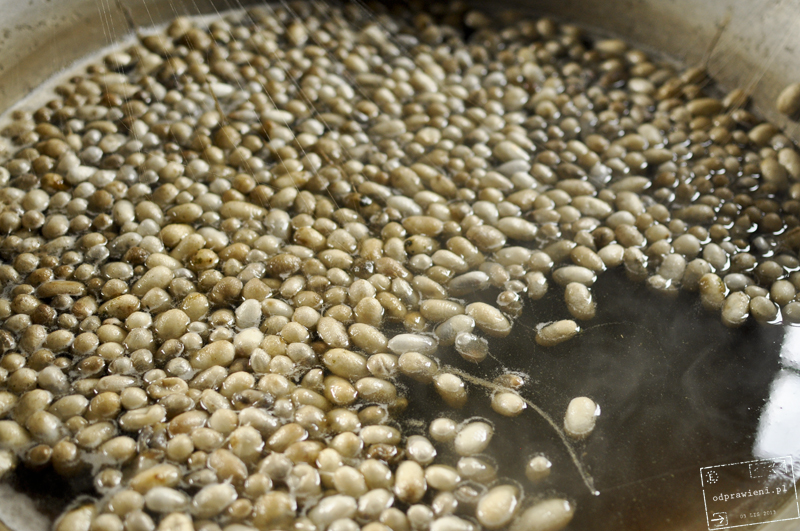 Everything starts here where the best quality silkworm cocoons are placed in boiling solution of water and soda. They are treated in that way for up to 10 hours but even before the end of that process one may notice single strands unloosening from “melting” cocoons. These strands are painstakingly collected manually with the use of a tool resembling a chisel, and then wound on hooks linked to a spindle on which the silk strands are spun (reeled). 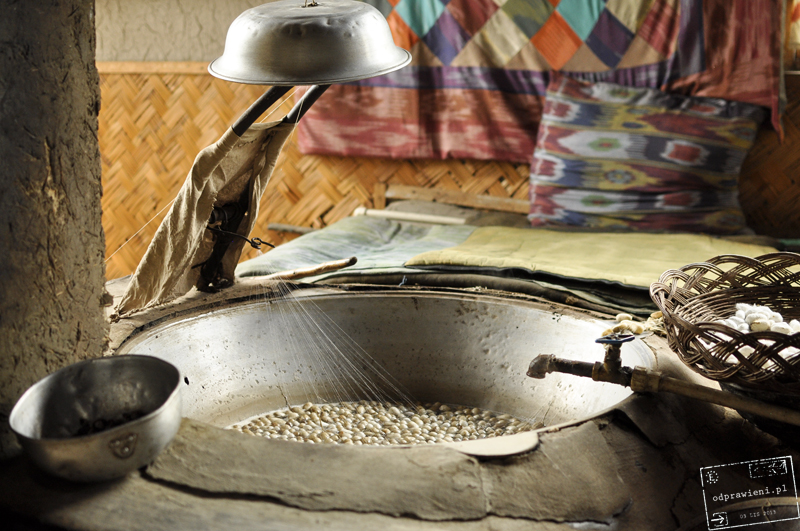 It is hard to believe but a single cocoon may yield even several kilometres of silk strands! After reeling these threads are said to be stronger than steel… well, maybe the locals over-coloured their comparison a little bit 😉 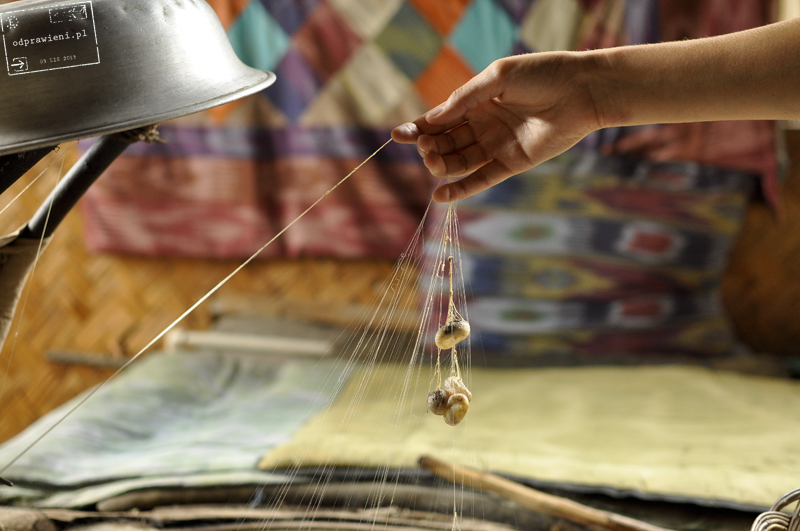 Silk scarves or clothes are made out of the best quality cocoons. Cocoons of poorer quality are used for carpets manufacturing. The cocoons are sorted at the very beginning of the production process by female employees of the factory, who perform that action manually, obviously. Interestingly, silkworm larvae from cocoons are not used in any way in Uzbekistan, while they constitute a popular street food in China. So far, Uzbekistan hasn’t started selling the larvae to China. 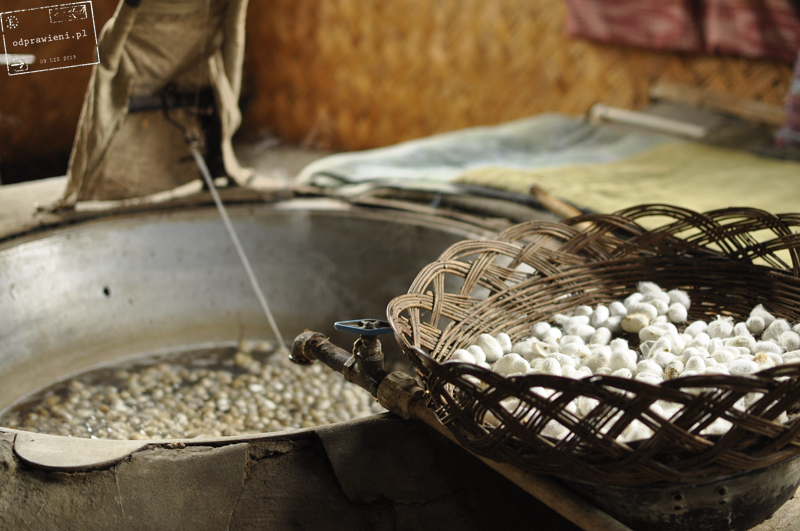 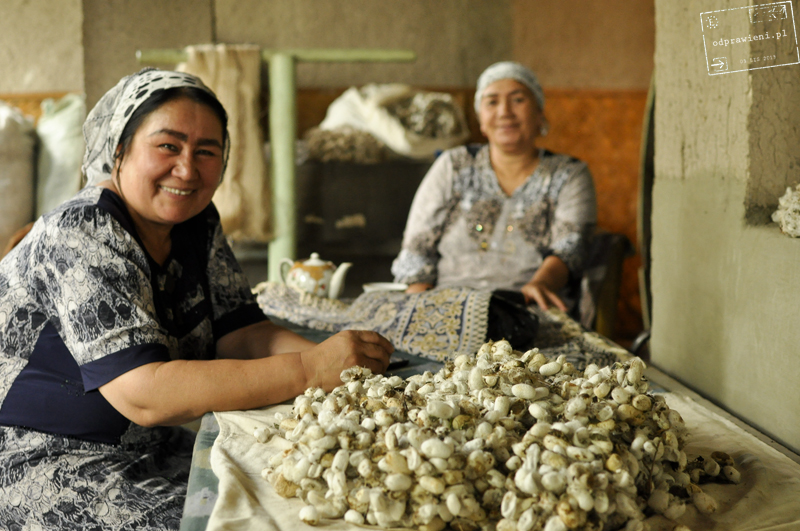 As we said before, the production plant is staffed mostly by women. One needs patience of a saint and enormous precision to work in the silk industry. Since very few men exhibit such qualities, the company’s management knows better than to employ men at posts requiring such skills. It is worth mentioning that the rare male teams in the factory work apart from women, in separate halls. It’s not a coincidence, nor has it anything to do with religion. It was simply observed in the past that performance of coeducational groups is usually poorer 😉 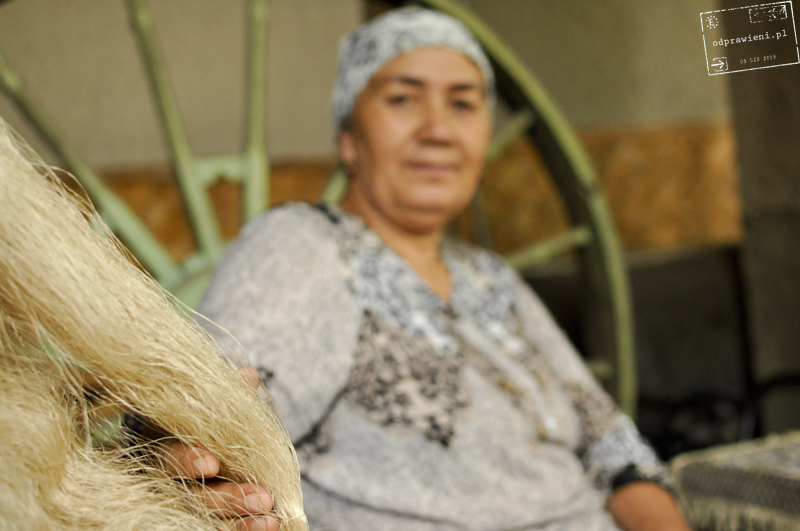 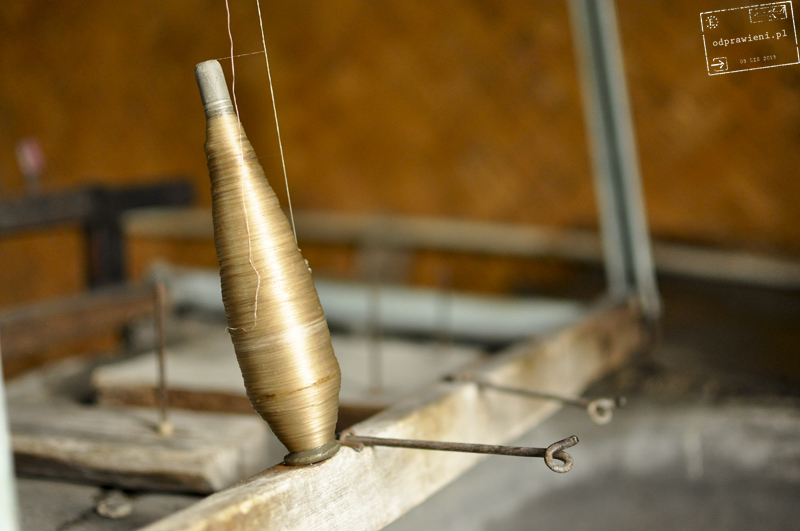 Strands that have already been wound and hardened are stored on reels that are later on used for production of scarves or carpets. It looks impressive, doesn’t it? The Uzbek silk is called “khan-atlas”, what simply means royal silk. 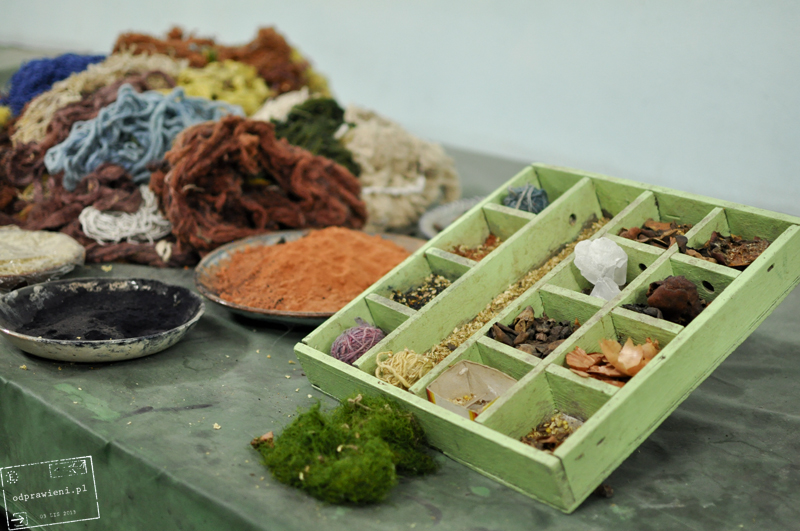 The silk factory uses almost solely natural substances for threads dyeing, such as onion, indigo or pepper. Natural ingredients may yield any colour you want really. There is also a separate room where artificial dues are used for colouring. Colouring is nothing else than keeping threads in boiling solutions for several hours until the required hue is achieved. Things become more interesting when a pattern requires multicoloured threads, as is often the case in carpets production. Then the threads are dyed manually with a brush according to the designer’s specifications. 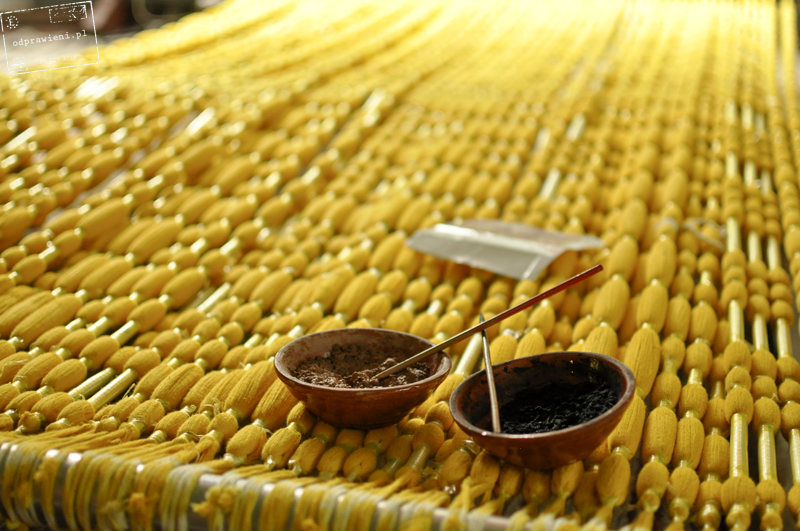 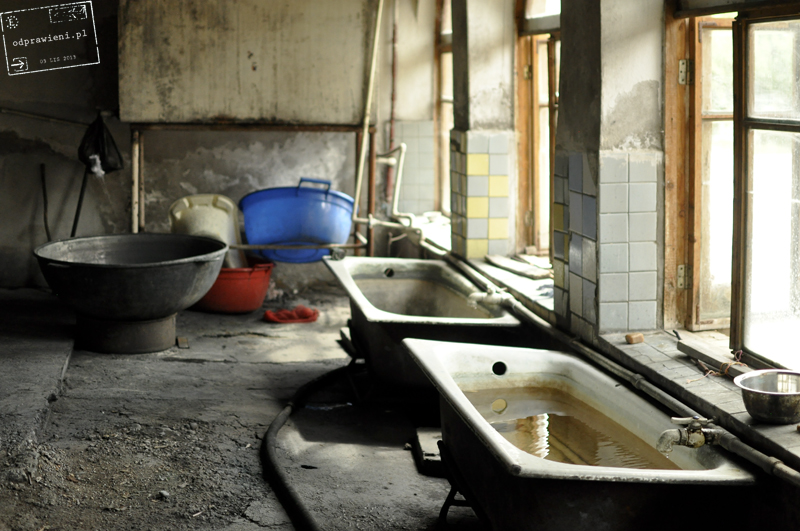 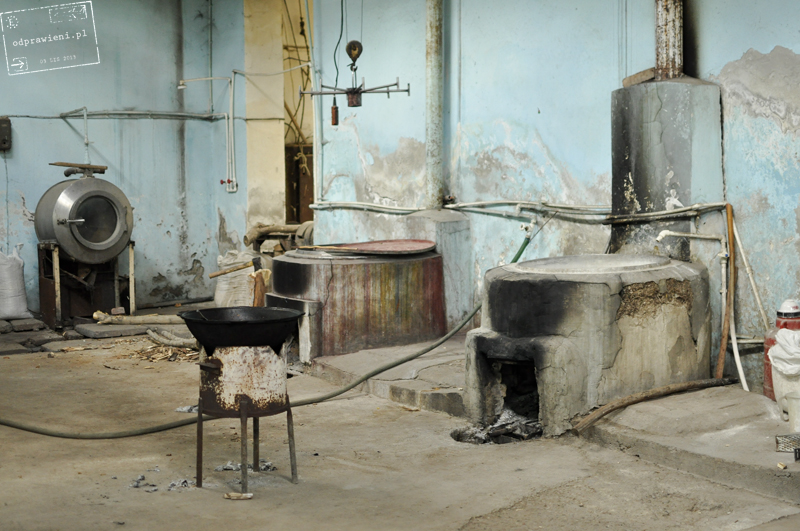 Dyed threads need only to be dried. After that they are ready to be used for production of silk miracles. Workers employed for production-related positions in the factory are paid on the basis of their output. Their daily output gives an idea of how hard their work is. On average, one worker is able to make around 1,5 – 2 cm of carpet during 8–10-hour shift. It follows that it takes around one year to make a medium-sized silk carpet (let’s say 1x1m). Since scarves and clothes are faster to make, they are correspondingly cheaper. 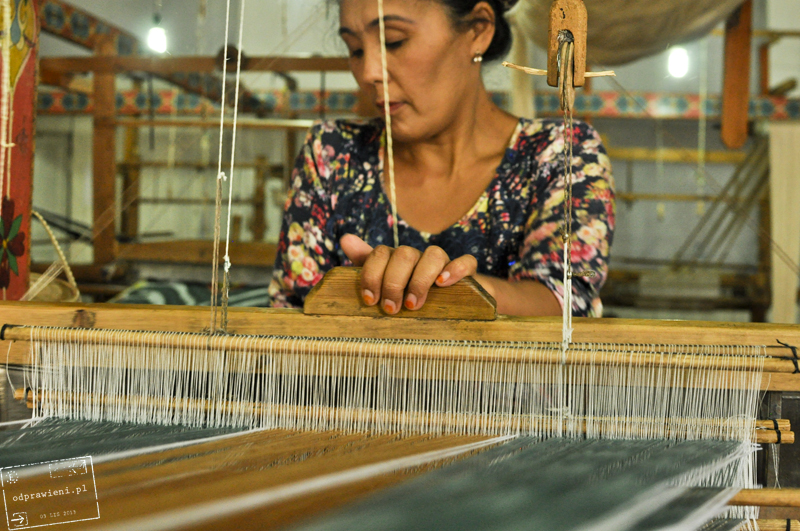 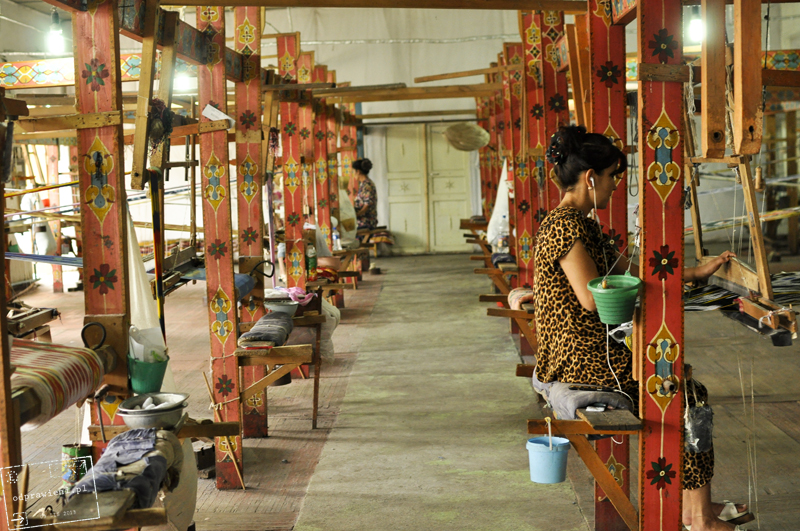 The two silk factories operating in Margilan provide jobs for around 20% of its citizens what makes them crucial employers in the region. Salaries, however, are a totally different story. Average take-home pay in Uzbekistan amounts to around $100. The costs of living are low but not that low. Most people make ends meet by double-dipping. You may see here a commercial factory but bazaars are full of hand-made products manufactured in Uzbek houses (such as scarves, tablecloths or pillowcases). 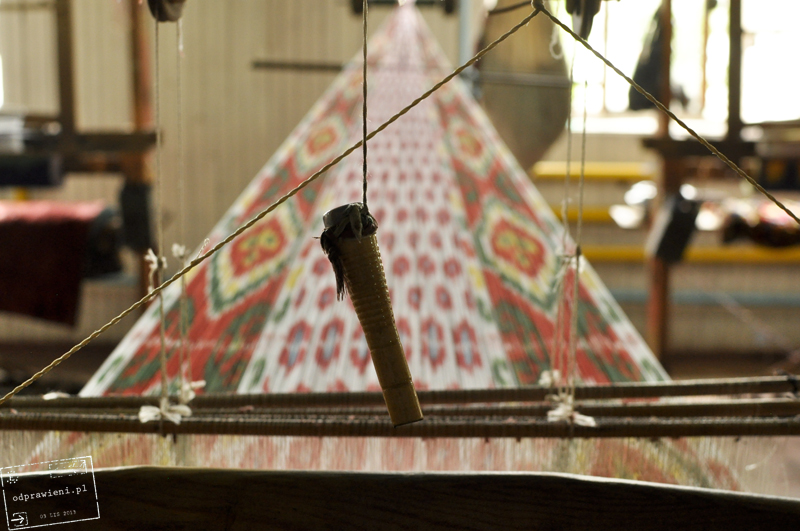 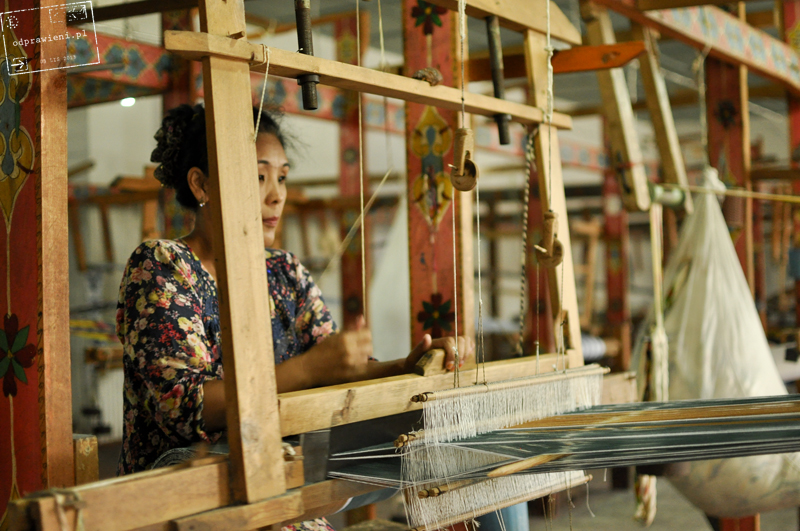 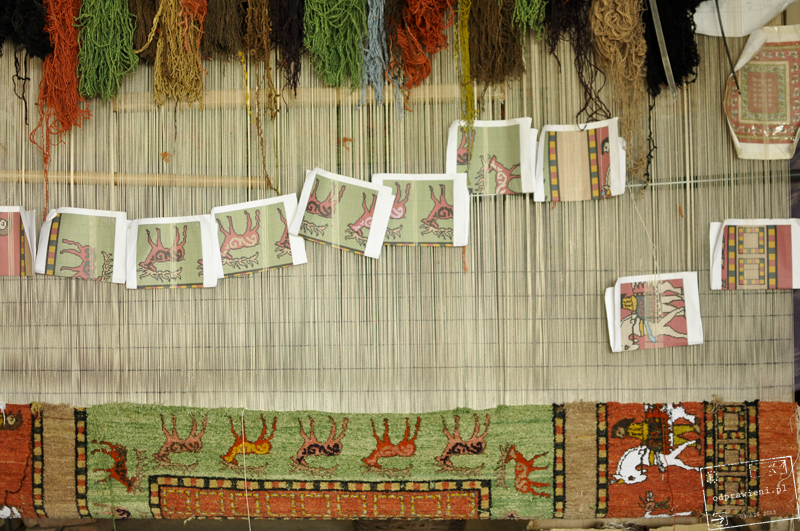 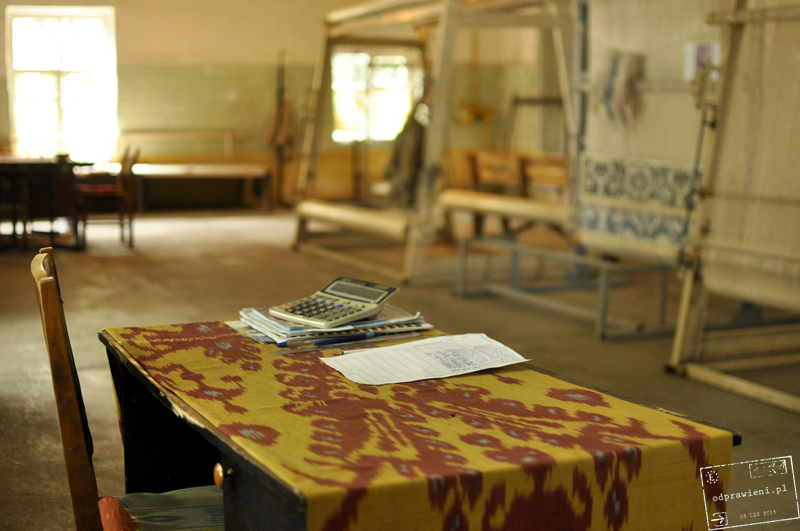 HOW TO GET THERE?

Although Margilan is a city hidden in the heart of the Fergana Valley, it is not that hard to get there. You may reach the city by land – a taxi from Tashkent to Fergana is around $6 if you go for “shared taxi” option. If you prefer to have a car with a driver for yourselves, you have to be ready to spend around $30. The road leads through mountains and rises to a height of over 2000 meters, what makes it incredibly picturesque. Hours of good car adventure provided Lazybones may opt for a plane from Tashkent –40minutes-long flight costs $20-30 if you are lucky to get cheaper tickets. Margilan is a stone’s throw from Fergana. A taxi shouldn’t cost you more than $2 (15000 Soms).

WHEN TO VISIT SILK FACTORY?

Yodgorlik Silk Factory operates all year round from Monday to Friday (with the exception of public holidays). It is supposed to be closed on weekends but that’s only theory because during season (May-October) the factory admits tourists on both Saturdays and Sundays. The production isn’t in full flow then (there are only a few people working in every production hall) but one may still see everything.

HOW MUCH DOES IT COST?

You may visit the factory for free. The last point of your trip is a shop selling in-house products –you may spend your money there if you want. What about prices?

IS IT WORTH YOUR TIME AND MONEY?

Read also about Shopping in Uzbekistan – what is worth to buy there – check HERE!