Even though we already have a post about the Aral Sea, it occurred to us that we might sum up our journey once again in terms of costs and potential ways of getting there, so that everyone could make up his mind whether the game is worth the candle. Once you get to Nukus, a city located in the northeast of Uzbekistan, you’ll most probably decide (like us) that, apart from the Savitsky Museum of Art, the city hasn’t got much to offer. In that moment an idea to catch the escaping shore of the Aral Sea will dawn on you. Taking into account the fact that in a dozen years or maybe several decades such a trip may not be possible anymore as the sea will be just a distant memory, you should definitely include that trip into your itinerary. How to get there? How much does it cost? The options are as follows:

1. Getting there on your own.

If you have an off-road vehicle or motorbike, a good GPS and enough bravery and courage …the road stands wide open. Don’t forget about a considerable fuel stock and victuals. Don’t assume that you may hitchhike there 😉

That type of adventure is usually organized through hotels (Jipek Joli, Nukus). Standard duration of the trip is two days but it may be extended unlimitedly at the client’s request. It’s just the question of price. Two-day option including hire of a car with a driver will cost around 400-450 dollars. You may choose from old Soviet off-road vehicles and modern-looking Jeeps. The price we’ve mentioned  includes only transportation and usually you’d be offered additional services such as: food for 35 dollars/person for two days, rental of a two-person tent for 10 dollars, a sleeping bag -3 dollars. As you can see, taking your own victuals and equipment may considerably reduce the costs. Importantly, you may pre-book such a trip via the Internet (Jipek Joli hotel). Not many cars go in that direction, so if you don’t book a car in advance, it may turn out that all of them will unfortunately be reserved at the time of your visit.

The dry bottom of the Aral Seal

Several words about the route. During two days you need to cover few hundred of kilometers in total. On the first day you’ll drive for 8 hours from Nukus through  Kungrad to the south-west coast of the sea. A significant part of the route leads through endless steppes. Contrary to what one might expect, it isn’t monotonous and when the weather is fine, you’ll have an opportunity to admire unforgettable views. The travellers spend the night in a tent with a magnificent view of a lake. If you get there, you definitely should make an effort to get up early and see the memorable spectacle of light over the surface of water during the sunrise. On the second day you’ll first reach a canyon created by the water which used to flow in it, and then, after driving for several kilometres through the bottom, you’ll reach Muynak where you’ll see the cemetery of rusting hulks and a museum. Organized trip is a safer option. The route is really difficult, mobile phones don’t work, and you’ll probably not see a living soul all along the way. Jeep drivers usually have satellite phones to contact the civilized world in case of some emergency. If you decide to take your own food with you, you have to protect it well. Tones of dust float in the air and it gets literally everywhere. The driver loads a big supply of fuel for the trip stored in somewhat leaking canisters. If you don’t protect the food well, it will be inedible after spending 8 hours in petrol vapours. 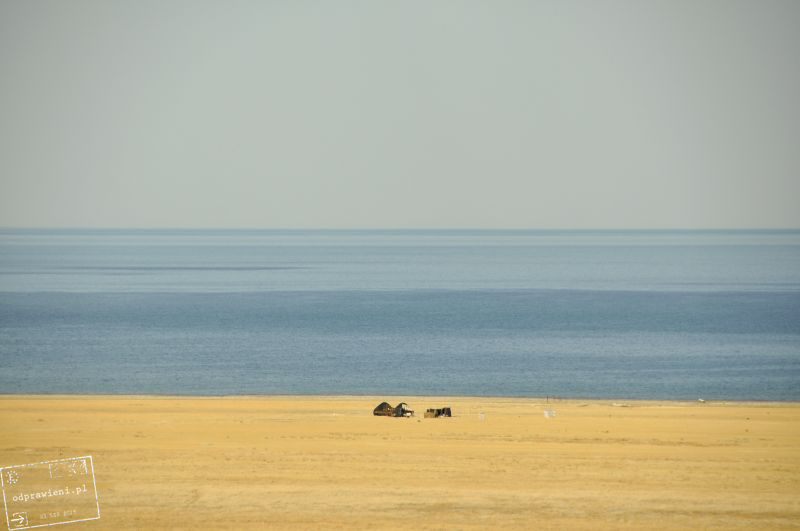 The Aral Sea , on the shore there is only one Chinese yurt, small shrimp farm. Chinese fishing shrimp in the sea and later sell as rare, exclusive commodity with health benefits.

3. Travelling by a passenger car.

It’s definitely the cheapest and the most dangerous option of all. The locals may offer to you a trip to the Aral Sea by a Daewoo car. The price will be lower -for the transport, food, tents and sleeping bags you’ll pay only 400 dollars. However, a passenger car will be a limitation as it’s not adjusted to difficult conditions and unable to get into interesting off-road places, what means that you’ll miss some beautiful views. Also the journey will be much longer. If you’re determined to choose that option despite our arguments, call the driver called Ilkin (0555538030, 0708006388). He’s been driving to the Aral Sea by Daewoo Nexia for 20 years and enjoys unblemished reputation in Nukus.

Sunrise over the Aral Sea…