There is almost a million of them in Israel and in Jerusalem itself their population amounts to 100 thousand. They don’t recognize the state of Israel and at the same time they occupy seats in the parliament where they make radical decisions concerning the future of the country. They consciously separate themselves from the civilized world treating it as a pit of corruption. Who are we talking about? Haredim Hassidim, representatives of the most orthodox branch of Judaism. They have their own house in Jerusalem – Mea Shearim district, which is for me one of the top positions in the “must see” list, as far as that city is concerned. It’s a fascinating and a little terrifying topic. 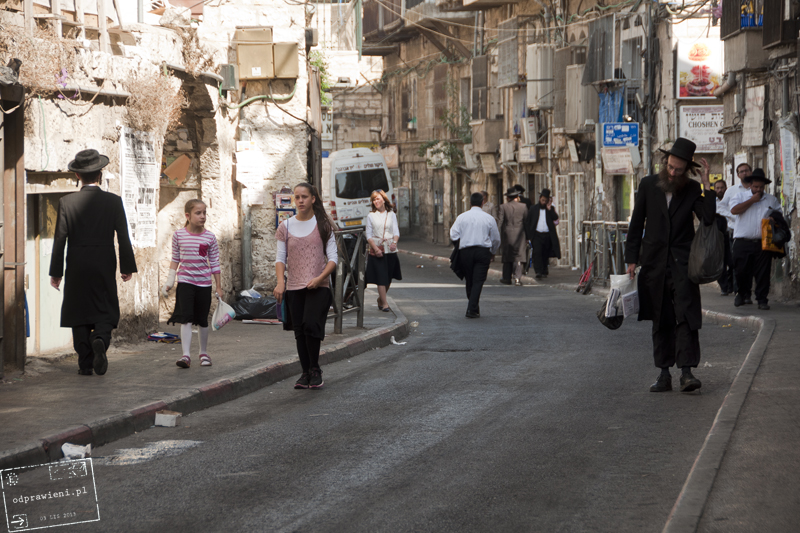 Mea Shearim district was founded in the late nineteenth century and since then nothing has changed there. 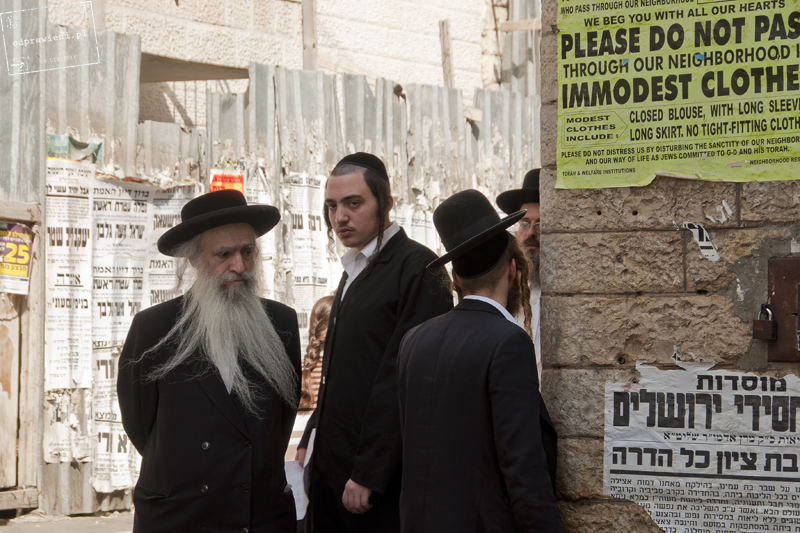 There are certain rules in Mea Shearim that the outsiders must  comply with. The tourists aren’t welcome there as they disrupt the order prevailing there for decades. A walking tourist, the pit of corruption of the modern world, is treated as a transparent being under the condition that he or she doesn’t  interfere with the surrounding environment too much. However, if you attract attention to yourself, you may hear a few words of reprimand (in a language which you don’t understand anyway – Yiddish). Women are obligated to stick to a precisely determined dress code, of which we are reminded at every step by bright yellow posters with a plea with threatening overtones : “Please, do not pass through our neighbourhood in immodest clothes”. Obviously it’s the respect for the place which makes us observe that rule… 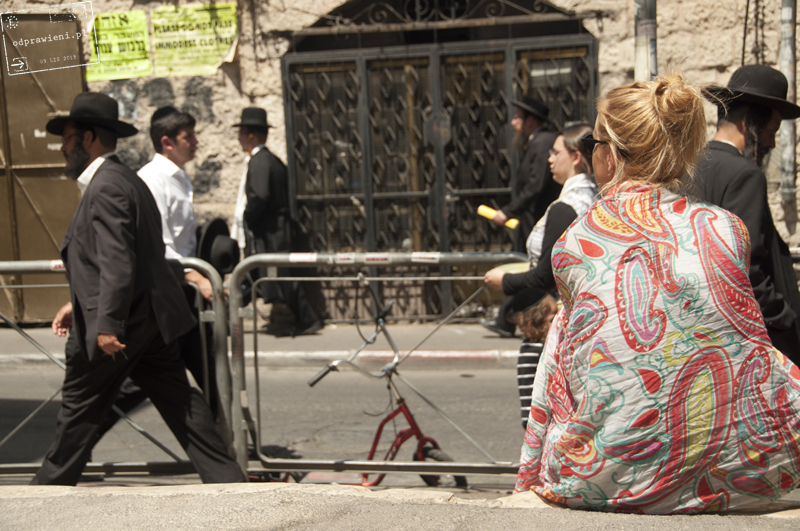 Tourist in Mea Shearim feels transparent, but in reality this transparency is an expression of slight ignorance. 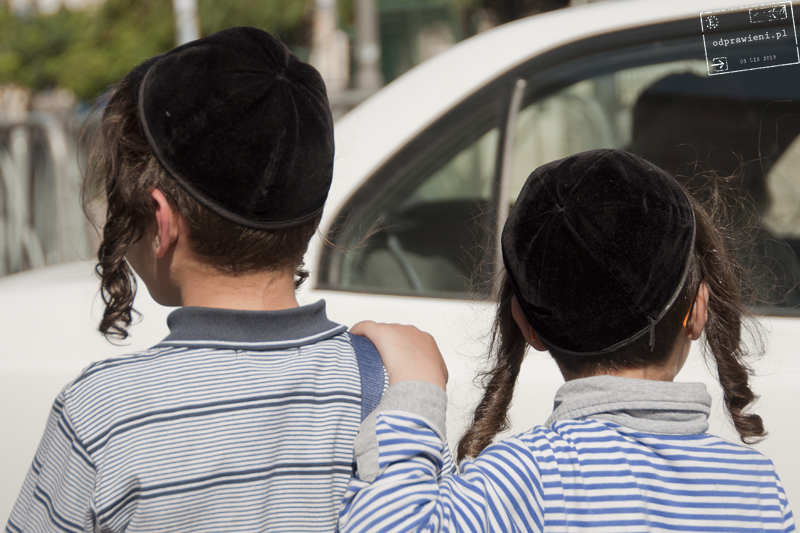 Children are everywhere… it is due to the enormous birthrate among Orthodox Jews. 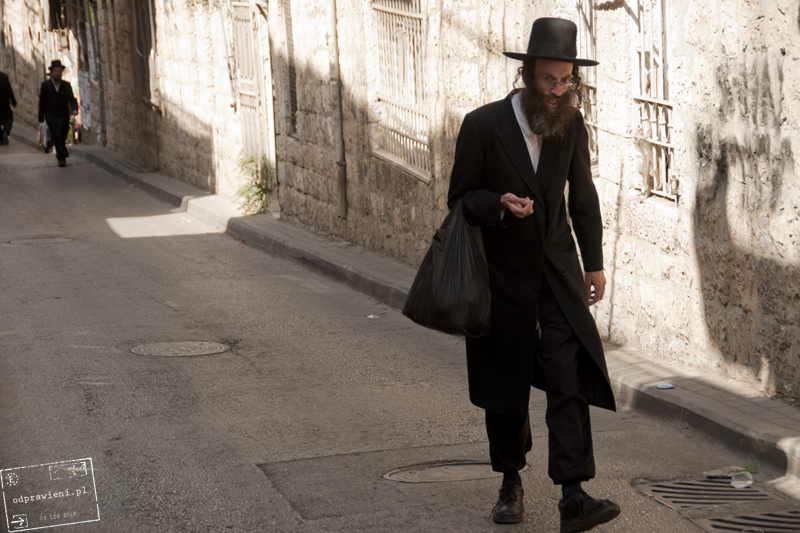 Majority of Haredim live below the poverty line. Large families make their living on social benefits granted to them by the state, which they don’t recognize after all… such a paradox. And there are in fact many of them to provide for by the state as procreation is strongly recommended in that community and contraception even more strongly stigmatized. Hassidic families often have six, nine… eleven children. They form large families with a capital L. Most men in such orthodox families don’t work -they study Torah in order to develop spiritually. For how long do they study? The duration of studies is varied. Some of them spend on them five, some ten, others fifteen years…  depending on the advancement level they desire to achieve. In that time the families get bigger and bigger and responsibility for the family rests on woman’s shoulders.  Wives usually finish their education fairly early, what prevents them from taking up any occupation (for which they wouldn’t have time anyway!). 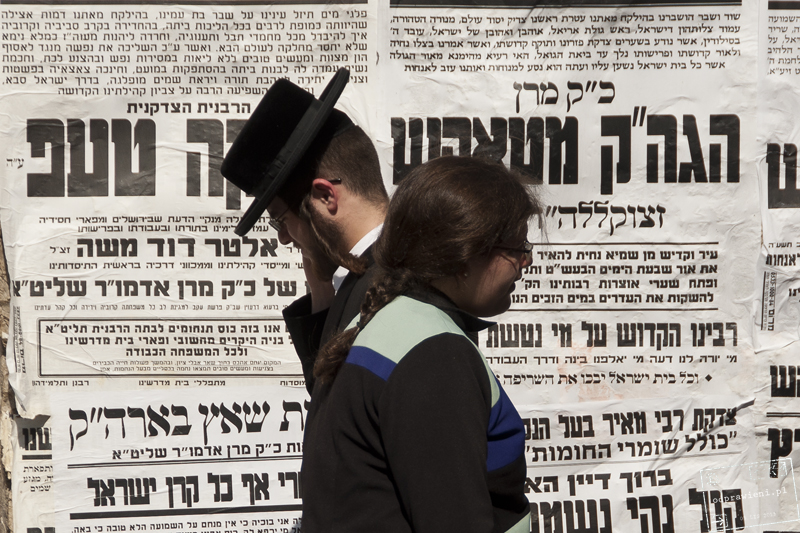 Pashkevils (posters) warn against everything that could disrupt the traditional way of life. 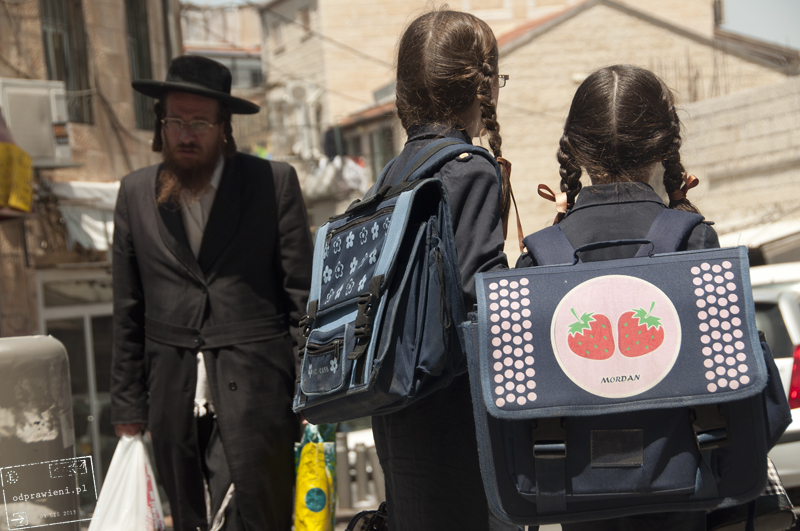 Haredim are so hermetic… they are in conflict even with the other branches of Judaism. Secular Jews are treated as unbelievers.

Ultra-orthodox Jews constitute currently a big problem for Israel and for many years the government has been launching new programs for professional activation to reduce the increasing unemployment in their society which amounts at present to 70% (!!!). However, the problem lies elsewhere. Their mentality, culture and views make them look at work as something  despicable. They make up around 10% of the society now, but if they maintain the pathologic population growth, in 30 years they will constitute – attention -70%! There is a great film about Haredim Hassidim, a documentary entitled “God Forbid!!!” It includes many interviews and one of them, an opinion of a young orthodox Jewish woman, a wife and a mother participating in a governmental course for women desiring to take up work in social assistance, is engraved deeply in my memory. When somebody was trying to convince her that a man having a large family must work to support it financially, she said:

“If in our times somebody has enough energy to study for the whole day or years, he should do it. Not many people are able to do that. Somebody who isn’t and only pretends to study, is an enemy of Israel. He should join the army or work, because otherwise he doesn’t contribute to our culture…” 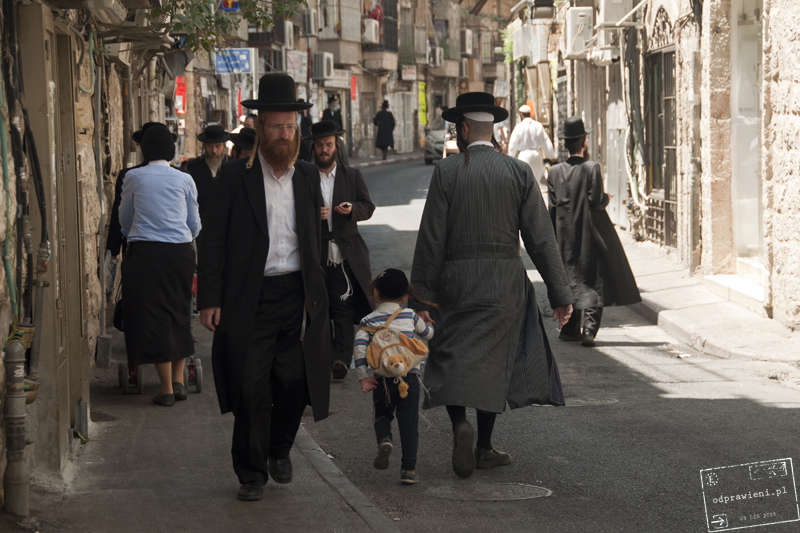 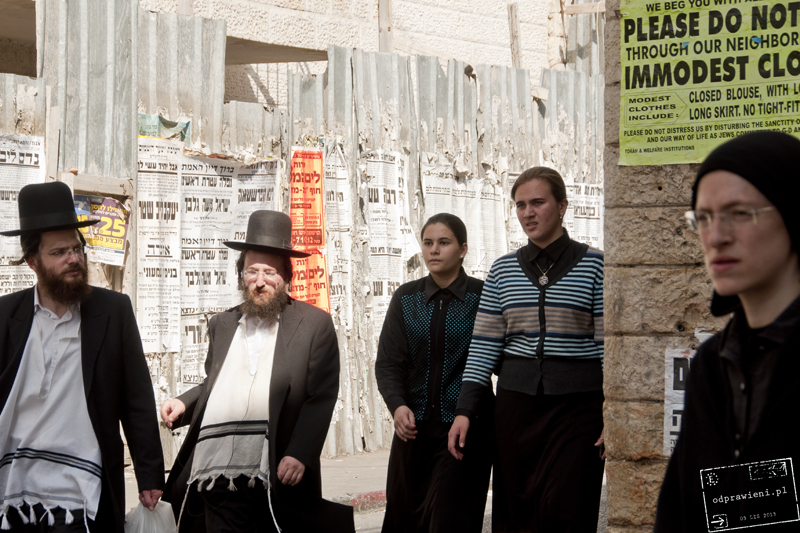 Mea Shearim makes a great impression, you’ll feel there as if you were on the set of a period movie, only the movie is being shot online … and everything is real. What hits the eyes of visitors, apart from the people, are the ubiquitous posters pasted to every wall in the district. They are the so-called pashkevils (interestingly, the Jews borrowed that word from Polish paszkwil).What is so important that it must decorate nearly every all neighbourhood? Things like information and warning to keep clear of the Internet, which is the source of all temptations and debauchery. If somebody have already been caught by the trap of the Internet, he should use the kosher Internet. Yes, there is something like that -it’s just a system with blocked websites or rather a search engine created especially to cater for these needs. The pashkevils in Mea Shearim simply warn or maybe remind the orthodox Jews to fight the temptations which await them on every corner! The warnings aren’t always polite -there is also a lot of aggression in them. 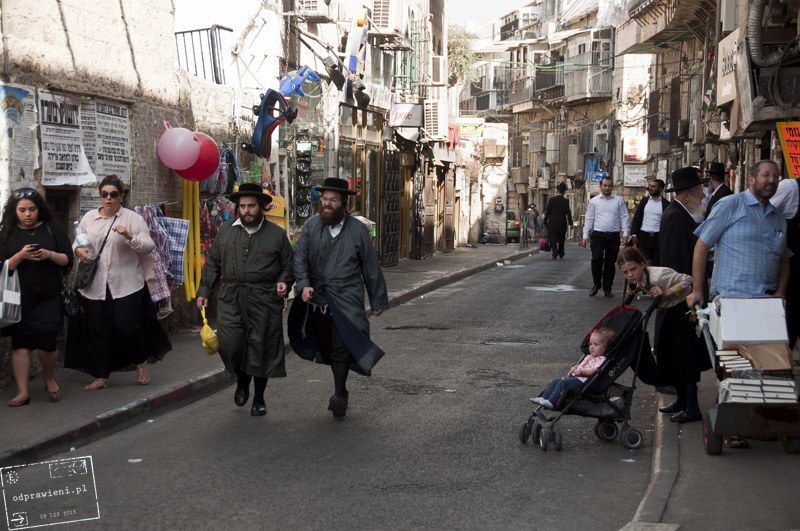 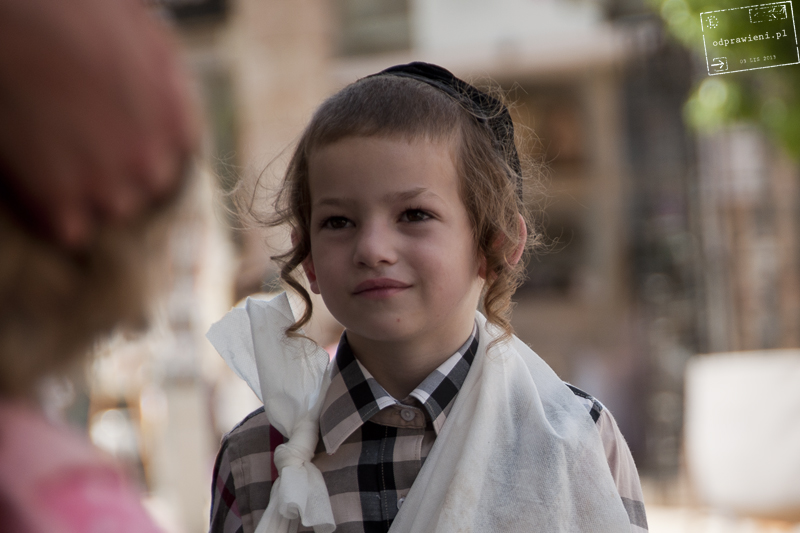 Poverty is visible and tangible in Mea Shearim. The streets are littered with rubbish and every few moments you may see a woman with a group of children holding fast to the pram pushed by the mother. The Haredim live very modestly; they often inhabit extremely small flats. They obviously don’t have TV or the Internet and they often get food from the social assistance. The Israel is trying to help them as they form a significant part of the nation after all. 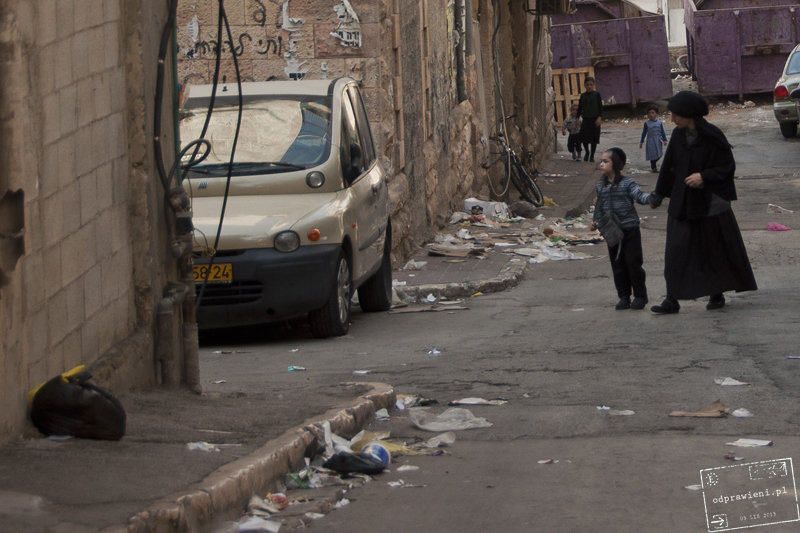 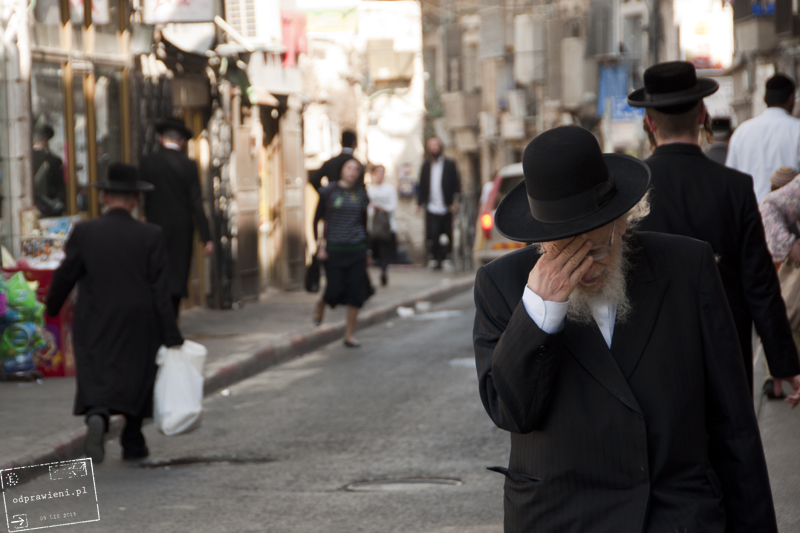 Mea Shearim it is very photogenic place but not very friendly for photographers. You must remember to follow and respect the rules! 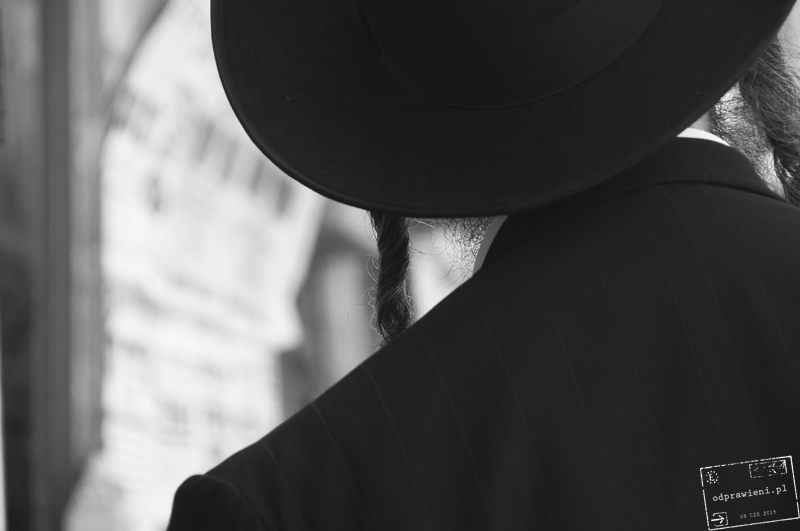 Sidelocks. Real Hassid has sidelocks at the age of three years when the traditional ritual of cutting boys hair takes place.

To sum up. Visit Mea Shearim. We, people from liberal Europe, may not quite understand that place. We don’t have to agree with everything, but the place is really worth seeing and we must respect it!