One thing is dead certain as far as Uzbek cuisine is concerned -when you visit Uzbekistan, you will taste plov. It’s a traditional dish the Uzbeks are absolutely crazy about, their truly unchallenged national dish. The said plov, sometimes called by the Polish people “pilaf”, is served in nearly every Uzbek restaurant or bar. Plov is prepared in enormous cauldrons called kazans. It takes a good few hours and a lot of work to make it. Tradition in Uzbekistan has it that only men are allowed to cook plov, what makes perfect sense as it is really hard physical work since the dish is usually made in huge quantities. Capacity of a typical kazan intended for everyday use is 5kg of rice and 3kg of meat, but you may also find cauldrons able to hold no less than 50kg of rice!


Plov is made of few ingredients: rice, beef or sheep meat, yellow carrot, onion, chickpeas, quail eggs, sometimes raisins, and a handful of aromatic spices, with cumin being the most important of them. The dish is really filling, quite fat, rich in taste and meaty. There are thousands of varieties of plov. The manner of preparation, choice of ingredients and the final taste varies by region of Uzbekistan.

Uzbeks start from heating up the fat until it is boiling; then they add meat, what generates a lot of smoke and sizzling. Next, they add painstakingly chopped vegetables, chickpeas, and finally rice with spices.

When we were in Uzbekistan, we watched the process of making plov several times. The photos from this post show Samarkand plov. It is prepared in layers separated by cloths so that they steamed. This practice makes plov much lighter and more delicate. When the dish is served, the ingredients are also arranged in layers, with meat at the top. In Bukhara, in contrast, all the ingredients are usually mixed from the very start. In that region it is also possible to taste plov made of chicken meat. And there is also another cooking technique, this time characteristic of Tashkent, in which all the ingredients are mixed and fried together in large quantities of fat. This heavy variety of plov is served with a slice of horse meat sausage called kazy, which tastes and looks equally bad -yuck!!!!

During weddings and festivals one cauldron of plov may feed up to 1000 people. Plov is served on beautiful, hand-painted serving plates from which all the feasters eat together.

The best place to taste plov, as well as to see the cooks actually preparing the dish, is Plov Centre in Tashkent. You absolutely must go there if you like culinary attractions and local places. Plov is cooked there in the open air; cooks are busy tending huge red-hot kazans, and waitresses bring ready portions of beautifully smelling plov to a big restaurant room. The place is really crowded, hot and noisy, and although it’s called a restaurant, it looks more like a fast food outlet. You really cannot miss that place -go and taste the most celebrated plov in Tashkent. The locals simply adore that place. It is said that the restaurant serves no less than 1.5 tonne of plov a day and what’s more, it sells out by 2 p.m.

Apart from the king of Uzbek plates, that is plov, one of the most popular dishes in Uzbekistan is laghman, consisting of homemade pasta, tomato sauce and meat, and served with fried egg. It’s a sort of Uzbek version of spaghetti bolognese but differently flavoured, fried and obviously much fatter. Laghman is also frequently prepared in the much lighter form of soup.

In general, the Uzbek cuisine will definitely not find favour with vegetarians or people who prefer light food. Its dishes are indeed highly aromatic and full of oriental spices, but they are also heavy, fat and meaty. Laghman, like plov, is a typical Uzbek dinner course and can be found almost everywhere.

Another dish that literally stole my heart were dumplings called in Russian “pelmeni”, or a different version of them called manti. They’re delicious, although it depends on the cook. Well made pelmeni have a spicy meat filling with onion and very thin dough. Pelmeni are tiny, just bite-size, and they are served in aromatic broth. Manti come in fanciful shapes, and they are usually served on a plate with a splash of cream. There is also good news for vegetarians -manti are sometimes also filled with delicious pumpkin filling.

Uzbeks also like soups. The most popular of them is mastava. It’s rich in taste, full of vegetables, as well meat (obviously), often served with potatoes and rice.

Since Uzbek cuisine is based on meat, it also includes shish kebabs, called there simply kebabs. They are made of chunks of well-spiced sheep meat or beef, or alternatively of mincemeat, always served with raw onion and bread.


I absolutely must write a few words about bread, which is a basic element of everyday diet in Uzbekistan. It looks similar everywhere -it’s round and flat, but its taste varies by region. In Tashkent it is usually really thin and almost crispy, while in Samarkand it’s thick, fluffy and shiny. Everybody tears their bread into pieces and serve it for breakfast or with soup. The bread is omnipresent and delicious. If you ever have an opportunity, enter a local bakery which anyway will tempt you with awesome smell. You’ll be able to see the traditional huge red-hot ovens where these round wonders are baked. 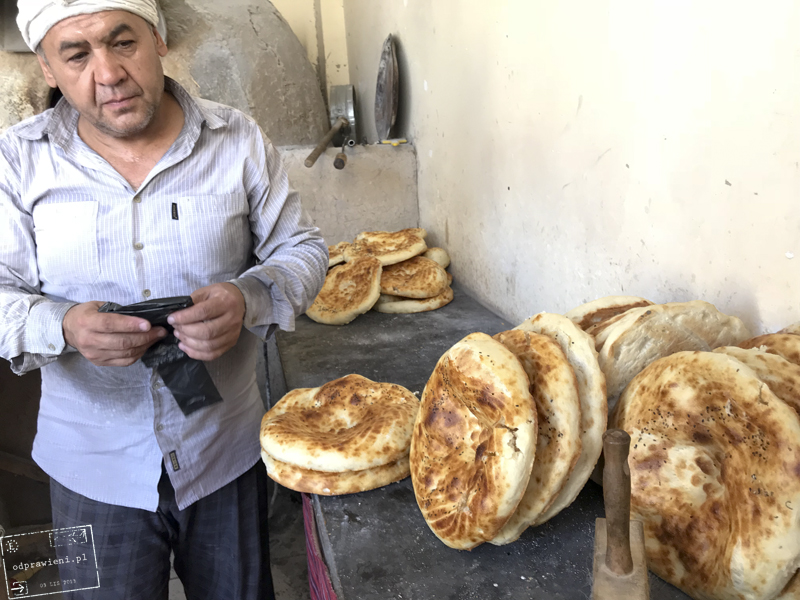 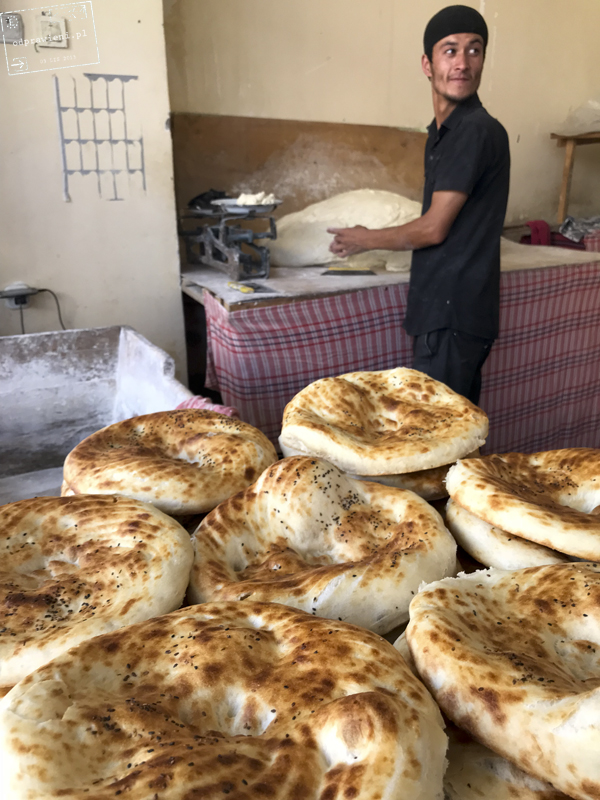 Uzbekistan is also famous for its incredibly sweet (allegedly the sweetest in the world!) watermelons and melons. During the season they are everywhere and they really are delicious. When the weather is hot, which in Uzbekistan ma really give you a hard time, it’s the best food. We also strongly recommend that you taste fresh figs, mulberry juice and all the rest of the tasty juicy fruit that happen to ripe during your visit. Grapes from Uzbekistan are so sweet that it’s hard to make dry wine of them, they contain too much sugar.