Samarkand … beyond the beaten track!

The list of must-sees of Samarkand is nearly identical in every guide book and no wonder, as it’s really hard to remain indifferent to the Registan, beautiful mosques and mausoleums. But once you’ve seen it all, reach for the list of attractions located beyond the beaten track. We actually went to see them all and we sincerely recommend them as they nicely complement a standard visit to Samarkand.

“Meros” Paper Mill in Konigil. How a dreamer from Samarkand revived an old tradition.

Just 5km from Samarkand a local craftsman called Zafir Mukhatarow created a very unique place which reminded the world about a 1000-year-old tradition of hand production of paper in Central Asia. It took 10 years to build the mill in Konigil, a small village practically bordering Samarkand. The costs of construction were covered by organizations from all over the world including UNESCO. However, the lion’s share of the cost was covered by the initiator of the project, what earned him a reputation of a “crazy” man in the local community and among his family. Paper from Samarkand was famous for its high quality and it was used for production of many Arab and Persian manuscripts from the 9th and 10th centuries.

The story goes that it was “betrayal” that brought the paper production to Samarkand. In 751 the Chinese invaded Central Asia and they were defeated by the army of the contemporary ruler of Samarkand. Thousands of Chinese soldiers were taken captive. Among the prisoners were also craftsmen who knew the secret art of paper production. It is believed that they unveiled the secret to buy their freedom. Since then Samarkand was a centre of paper production in Central Asia. Unfortunately, after the city was colonized by Russia in the 19th century, this ancient art became obsolete as industrial production of paper was introduced. In 1995 Zafir Mukhatarov participated in an international United Nations conference on lost culture in Uzbekistan and the paper from Samarkand was one of its main topics. That’s how it all started. Mukhatarov had a dream that such paper mill could be recreated in Samarkand. Its construction begun 6 years later in 2001. Today Meros Paper Mill is one of the must-sees for the tourists visiting the Samarkand. In addition Meros neither has a website, nor does it advertize itself. Nevertheless, it is visited every year by around 5000 guests from all over the world (what is still very few for such an interesting place). 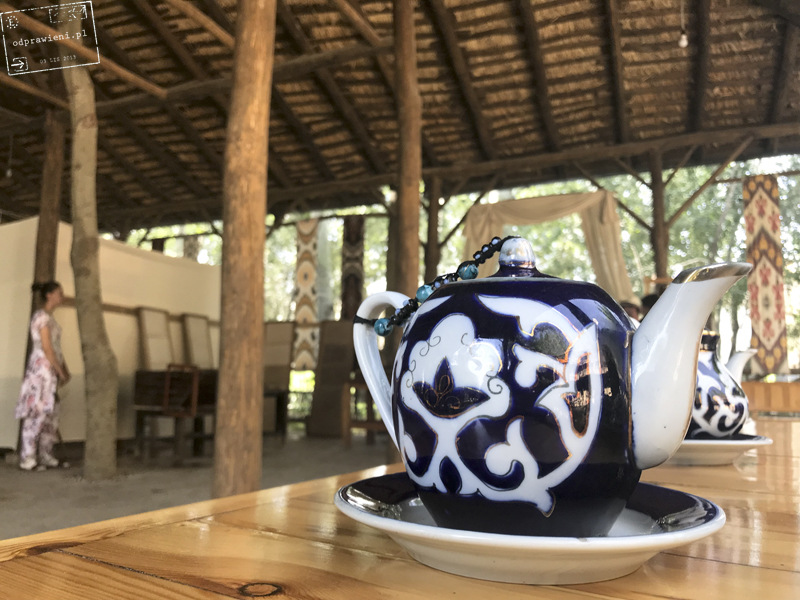 Technology of paper production is really simple and it includes just a few steps, yet the devil is in the detail – formula and raw material. The material used is bark of the tree called mulberry (annual, no other). At the very beginning the bark is cleaned from outside and boiled in a big “pan” for a few to even over a dozen hours. Then the bark is mashed in a mill system rotated by water wheels until it has uniform consistency of dough. Thus created mixture is placed in a tube with water and filtrated in a big press designed especially for that purpose. Next the excess of water is squeezed out of now-forming sheet of paper by covering it with another new sheet of paper. The press remains tightly pressed for 24 hours. When this stage of production is completed, the sheets are hung up to dry for a day. The paper is almost finished; all that remains to be done is smoothing the surface of the sheets. The paper from Samarkand is unique in its smoothness which is achieved by manual polishing on a granite table (performed by a “master of polish” who patiently rubs the paper with a stone). The owner of the mill expresses a personal belief that polishing was a feature characteristic of the paper from Samarkand.  Paper from China or Japan had rough surface and it was written on with a brush while the paper from Samarkand – with a feather. The Samarkand paper is also uniquely yellowish and durable; manuscripts made of it survived for as long as 500-600 years. The owner of Meros Paper Mill reportedly was in conflict with the Uzbek authorities over “illegal” logging (before he planted his own mulberry trees). Mulberry is a plant that plays a crucial role also in cotton production (silkworms feed on its leaves). Since cotton production is still a crucial branch of industry in Uzbekistan, mulberry is under special protection of the local authorities. 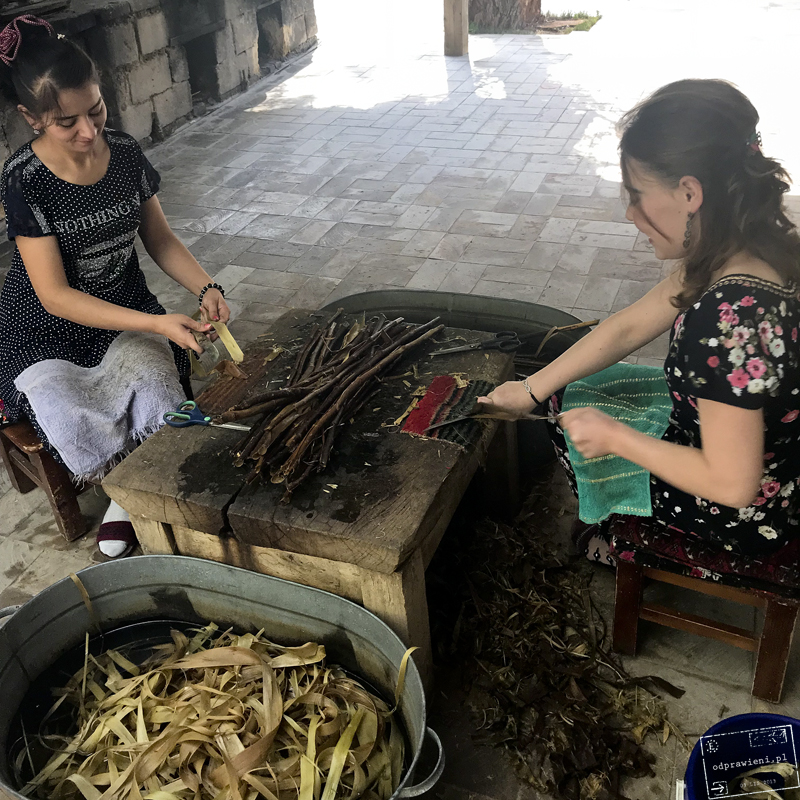 Paper mill is situated in exceedingly charming and picturesque surroundings, right by Siyob River. Tourists come to the sizeable roofed wooden bower standing among coppices (of mulberries, obviously) to watch the process of paper production and to buy paper souvenirs (postcards, sheets of paper, paper women’s handbags or even full folk costumes). They are also encouraged to taste the local green cup during their visit to the paper mill.

How to get there? 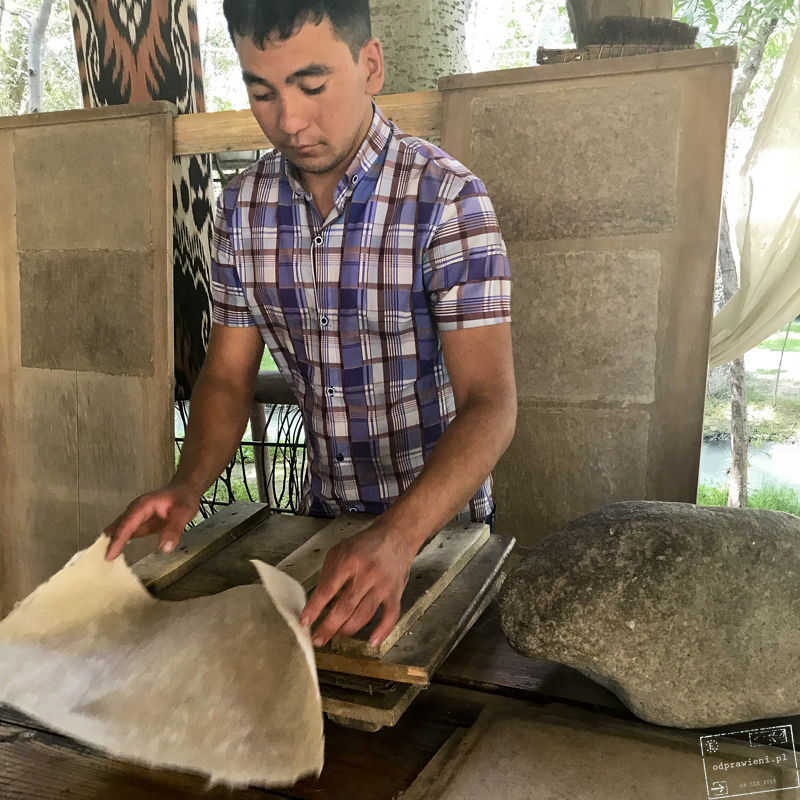 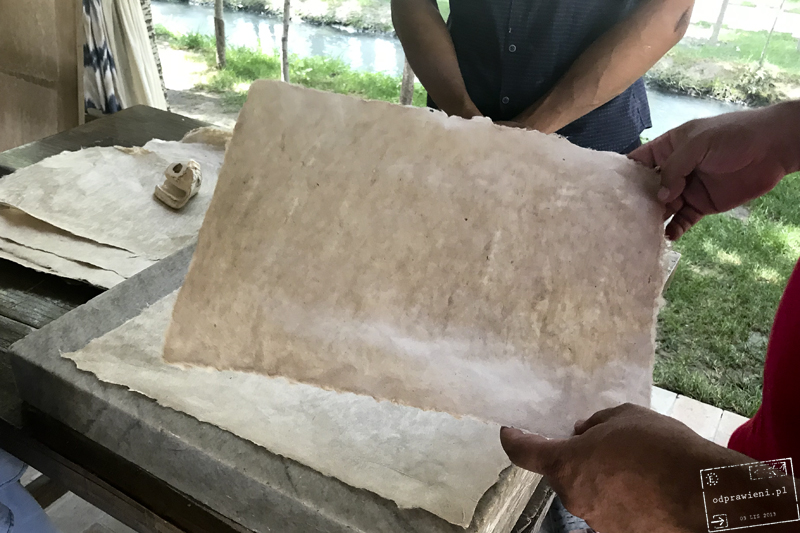 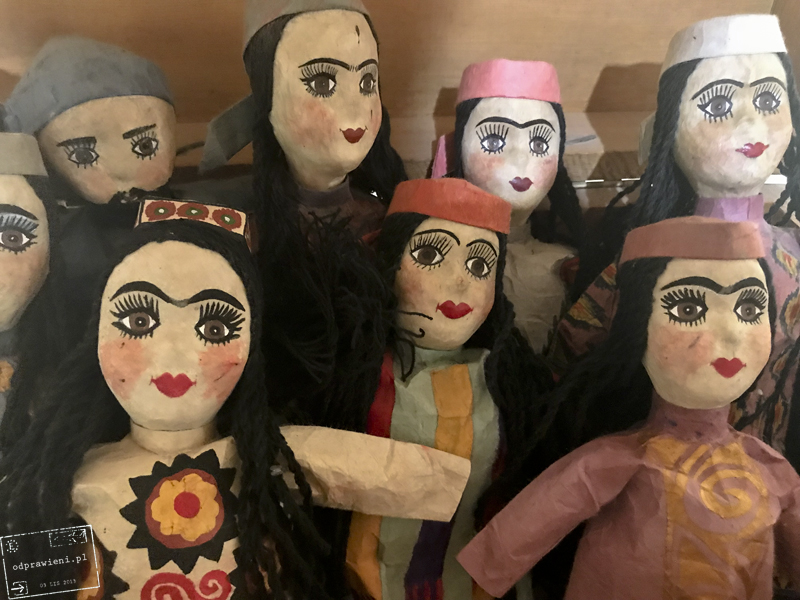 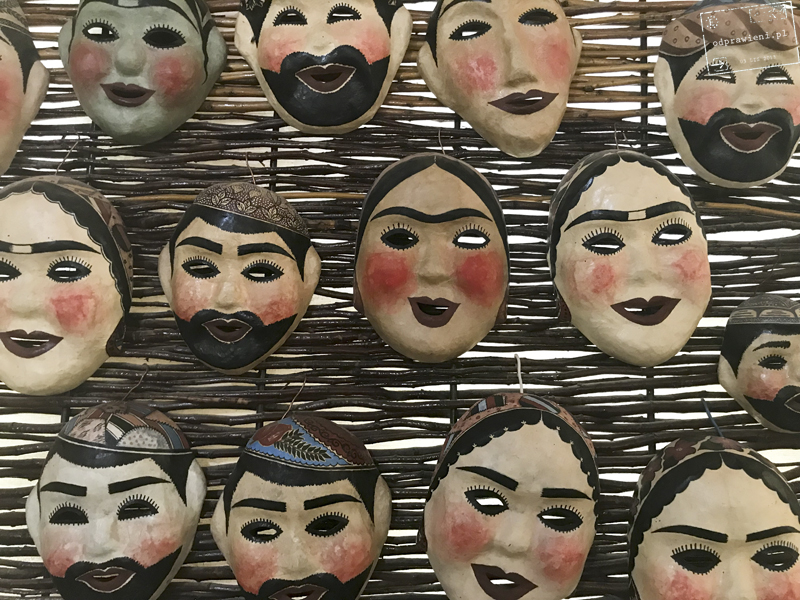 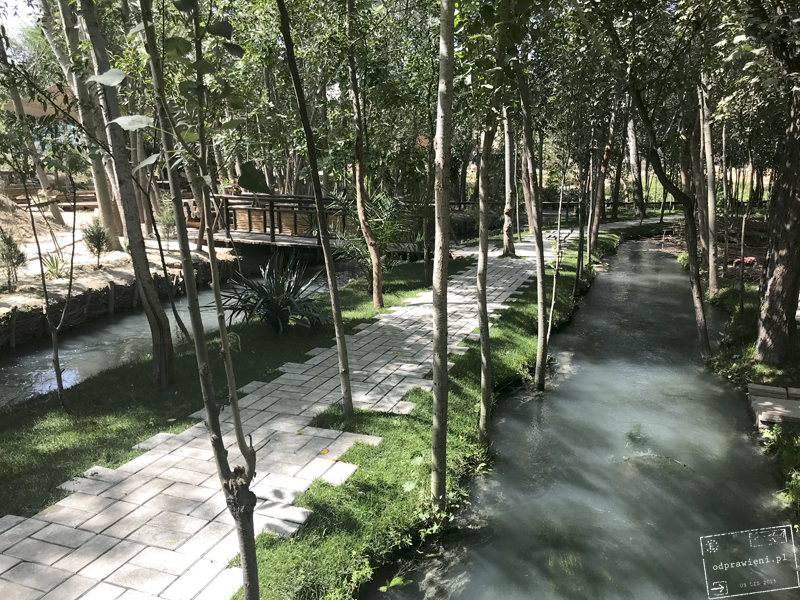 Ceramics workshop of the Ablakulov family

Urgut is a town located around 40km from Samarkand. It is known principally from its enormous bazaar. In the maze of streets of Urgut there is also another place definitely worth visiting that you won’t see on a tourist map of the area. That place is a ceramic workshop run by the Ablakulov family. The Urgut ceramics with its characteristic brown-green glaze have been made in the family-run workshop for 9 generations. The family set up the business in the 17th century. Crafts provide the main source of income for the whole family. Men make ceramics which later on is sent to Numon Ablakulov’s gallery in Tashkent and realize private orders while women practice suzani embroidery and their suzani textiles are then sold at bazaars located in the surrounding area – in Samarkand, Tashkent and Urgut. The place is not very tourist-oriented – there are children playing in the backyard, cats laying lazily in various places and master Numon himself (if he has some spare time) gives tours of the small workshop. The workshop consists of three rooms: a basement where these clay pieces of art are created, a room where the pottery is fired in two gas furnaces and a mini-gallery where visitors may purchase finished products or only look at them. Owing to good will of the family the entrance to the workshop is free of charge. They simply like to talk to people about the tradition that has been maintained for centuries. 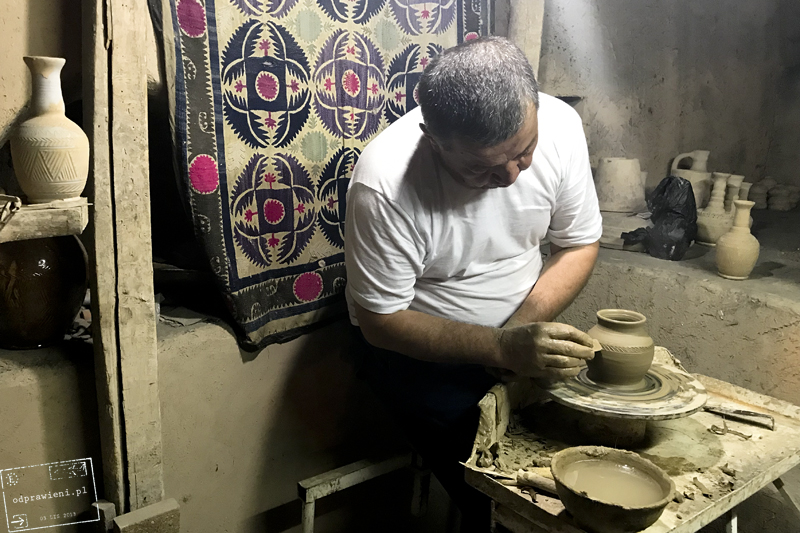 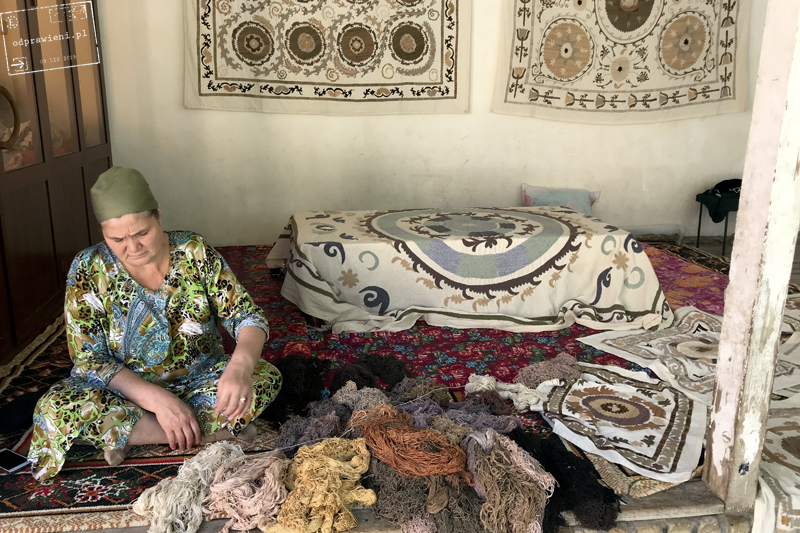 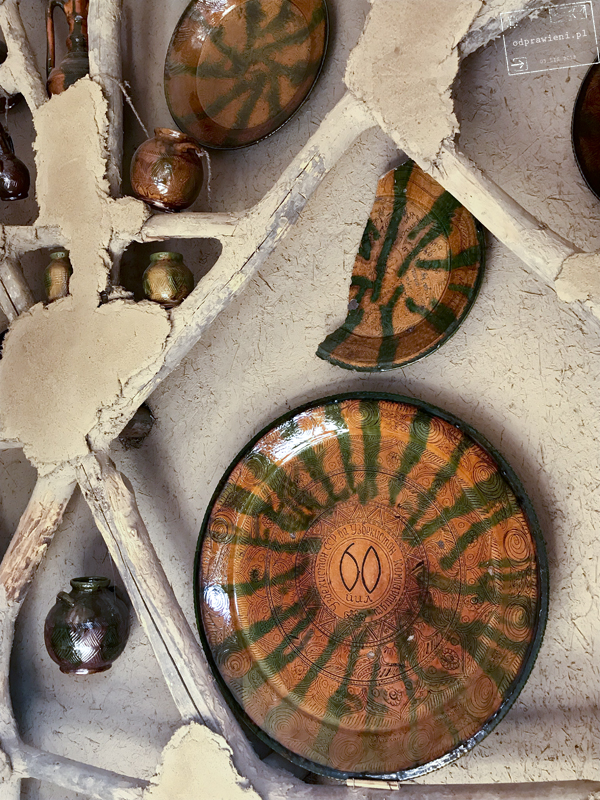 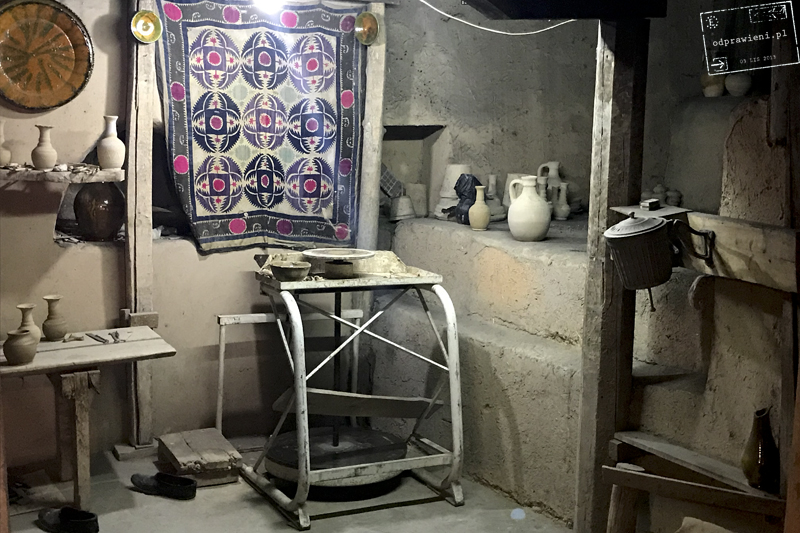 Chor Chinor, that is, an oasis of sacred serenity among sycamore trees

Around 50km southeast of Samarkand, near the border with Tajikistan, in an ancient town of Urgut, there is a magical and truly mystical place well-known among local inhabitants but rarely visited by tourists. It’s a sacred sycamore tree garden called Chor Chinor (translates as “four sycamore trees”). Pilgrims from all Central Asia come here in search of wisdom, prayer, penance or healing. Chor Chinor is a big park full of enormous and very old sycamore trees. It is said that there are as many as 50 of them and the most ancient one is 1160 years old while the youngest “only” 600 years old. There is a very interesting spot right next to the entrance to the park. It’s a sycamore three called Mekteb-Chinar (meaning the “school tree”) measuring 35m in height and 16m in girth. Inside the three there is a small room with very minimalistic design accessible through carved doors. The room used to be a Sufi school as well as a destination of pilgrimages undertaken by numerous generations of Dervishes (Muslim brotherhood based on Sufi doctrine). The stream that flows through the park begins at the end of the complex, next to the pond and it looks as if it sprung right from a big rock. Its water is also believed to have healing powers and the pilgrims catch it in bottles to give as presents to sick or lost people. At the beginning of the 20th century a mosque was erected in the centre of the complex and the building blends in with the surrounding very well. The first thing that catches one’s attention is the silence of the park broken only by the intensive chirping of birds. The three-kilometer-long narrow stony road that leads from the town of Urgut to the park is really picturesque as it winds uphill through the maze of other streets. The legend has it that the first four sycamore trees were planted by one of the rulers of Urgut – Hodja Abdu Talib. According to the tradition he was buried under the trees that he plated. Chor Chinor is a perfect place if you want to escape for a while from the tourist-oriented Samarkand, enjoy the silence or contemplate under one of the ancient trees along with other pilgrims. 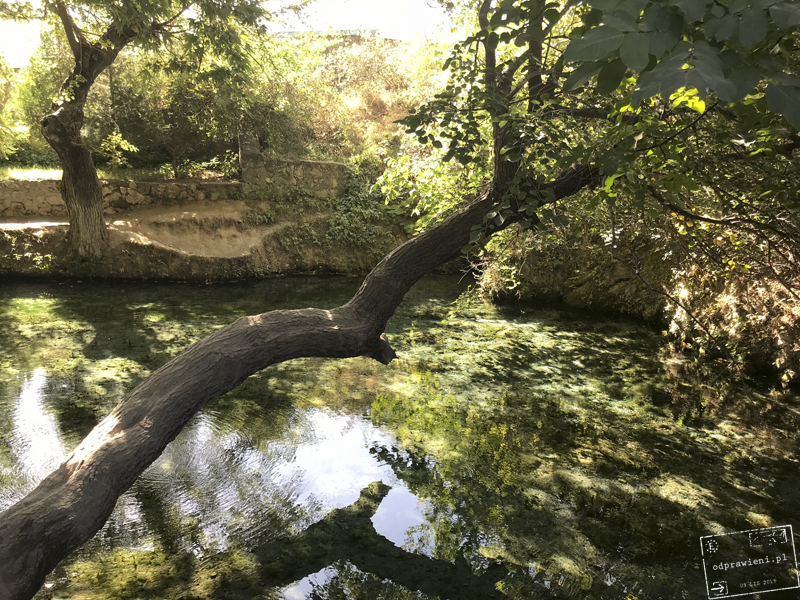 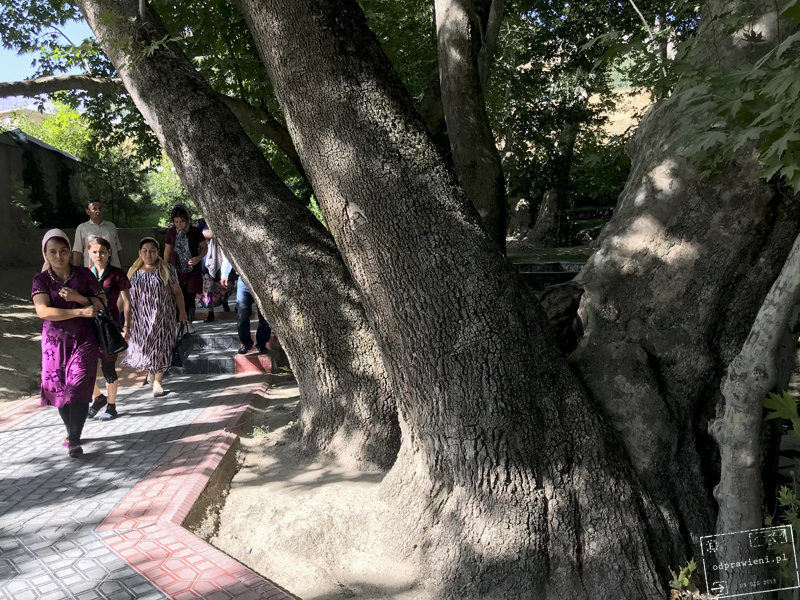 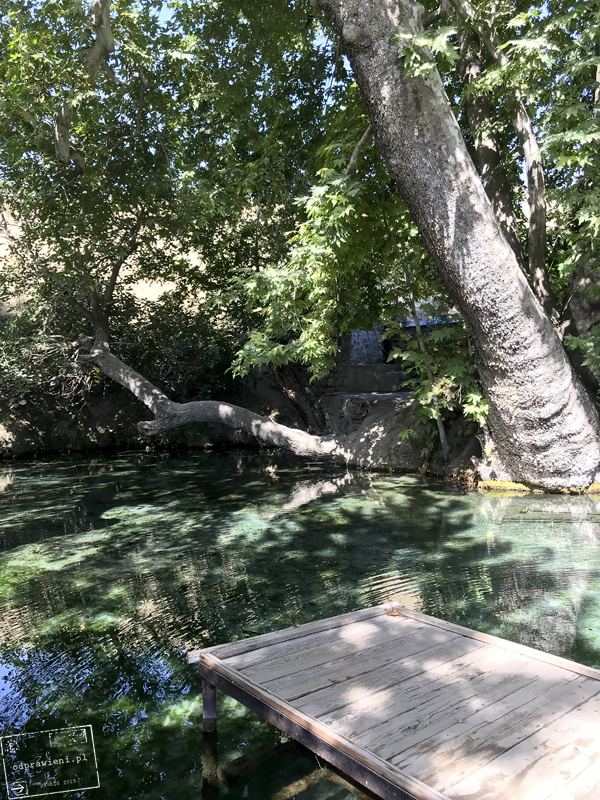 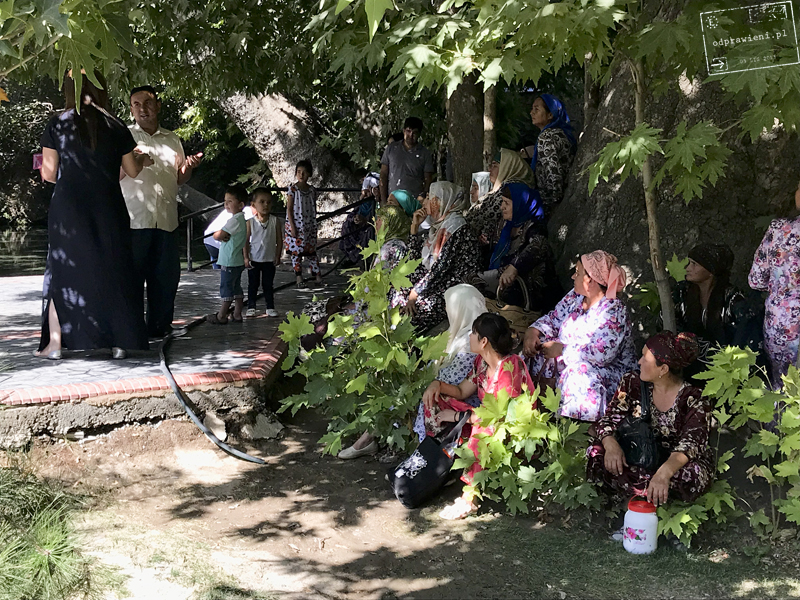 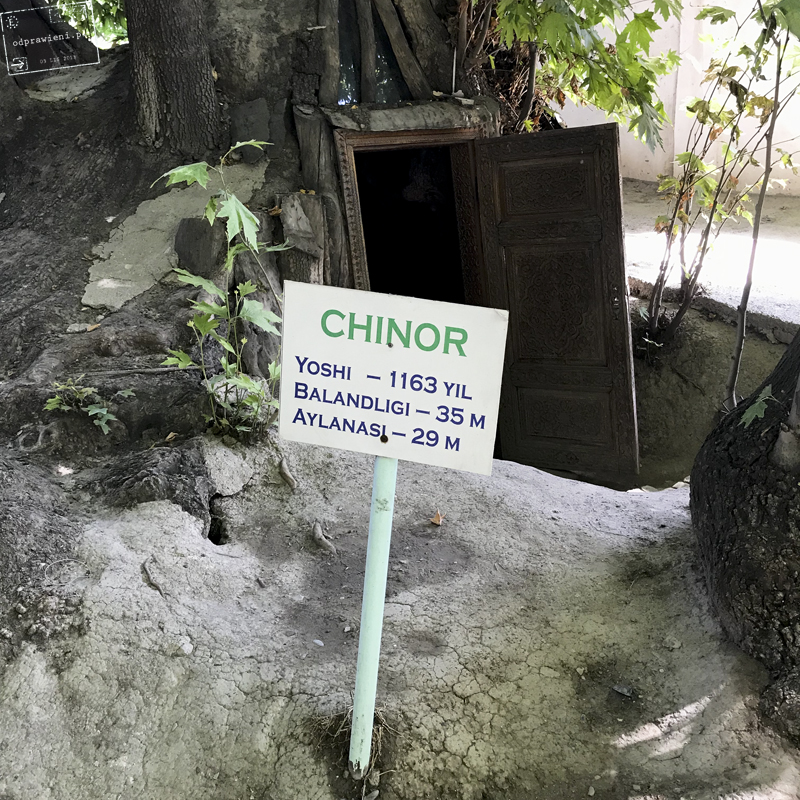 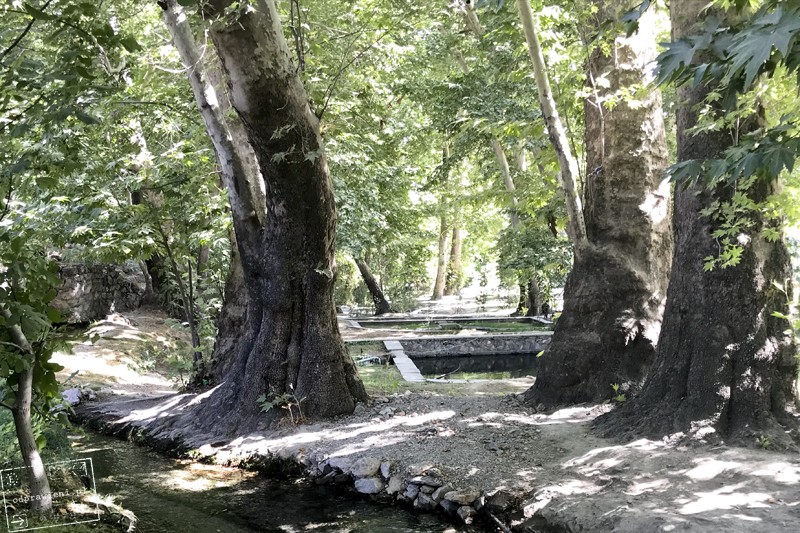 You need to walk less than a kilometer from the complex Shah-i-Zinda to reach a relatively new (as it was established in 1992) yet traditional carpet factory called “Samarkand Bukhara Silk Carpets”. It’s a sort of a family-run company started by an Afghan family that emigrated to Samarkand in the 1990s. Apart from being a tourist attraction, the company is also a dynamically operating factory employing 400 workers (mostly women). Its management is proudly complying with labour rights such as annual holiday entitlement or maternity leave as well as 8-hour working day, frequent breaks, 4-month-long paid training system, or even a “home office” option for women creating suzani after they have a baby. Haji Baba’s idea to set up a carpet weaving factory met with great enthusiasm of the Uzbek authorities in the 1990s as in that period all initiatives referring to the often forgotten crafts of the Central Asia were welcomed and supported.

Today the factory is run by Haji’s children -his son Abdullah and daughter Zainab. The production is based on traditional ancient methods “from a silkworm” to a finished product (carpet, suzani, shawls), often very expensive. All the painstaking work is performed manually and 99% of the natural dyes come from the local Uzbek market. Some of them are even grown in the on-site garden (only indigo is exported from India). Every step of production is supervised by the senior founder who still walks along the corridors of the factory (he is now over 100 years old!). Apart from the products based on the pattern book, Abdullah’s team also accepts special orders, e.g. carpets on commission from the Arab sheikhs with their own likenesses, orders from millionaires as well as ordinary and frequently poor families which wish to give their products as presents to their relatives.Samarkand Bukhara Silk Carpets Factory is open for tourists seven days a week (on request by telephone +998 66 2352273). Entrance is free and Manager Abdullah gladly shows the tourists around the subsequent “production rooms” including the impressive final shop/showroom. Tourists may also see the “stars showcase” presenting commemorative photographs taken during visits of powerful heads of states (such as Vladimir Putin or Hilary Clinton). Prices of carpets are definitely high –starting from several hundred dollars for a small one and ending at… indeed, there seems to be no upper price limit. The place is definitely worth visiting.xx 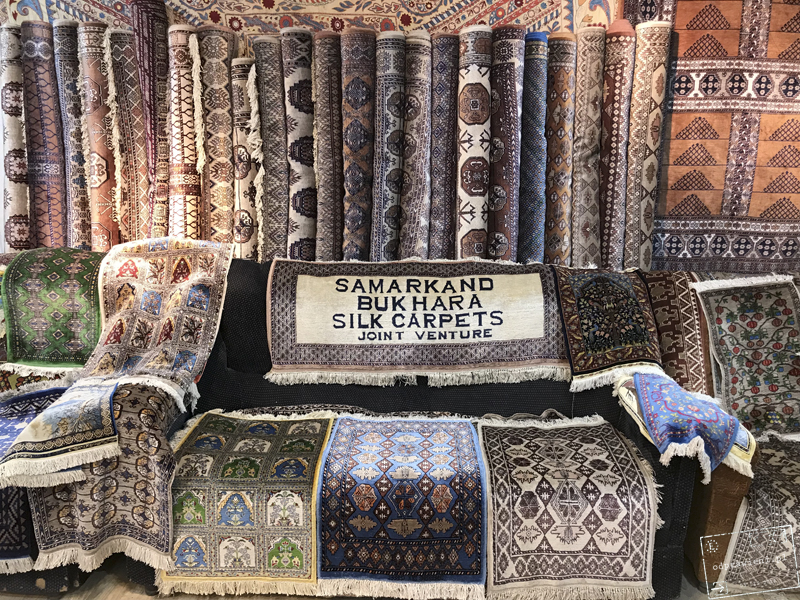 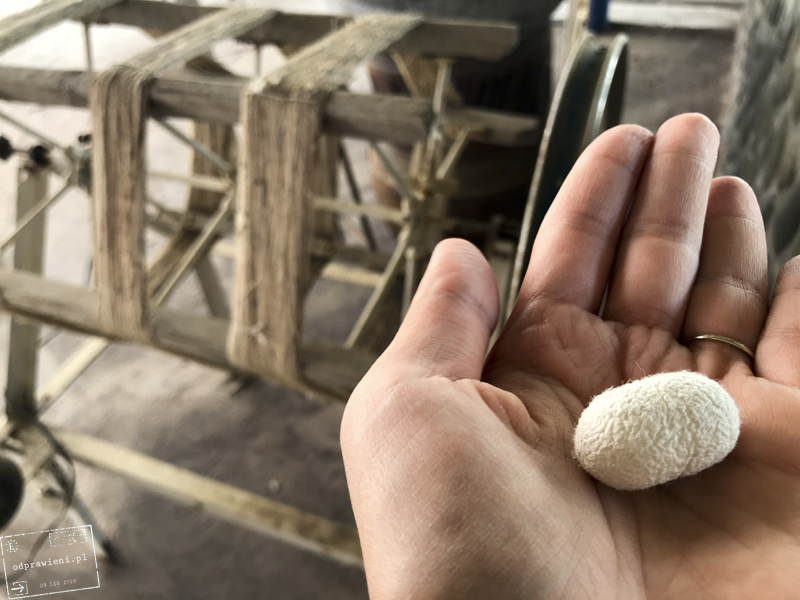 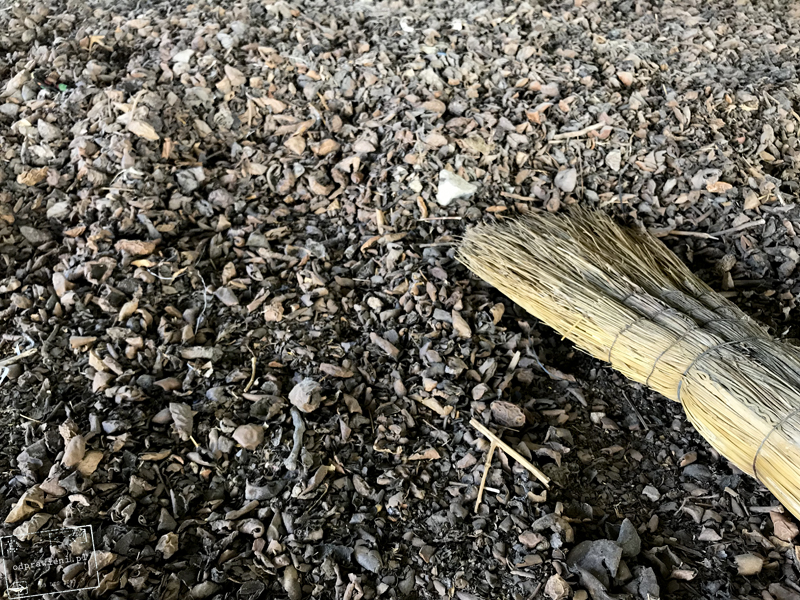 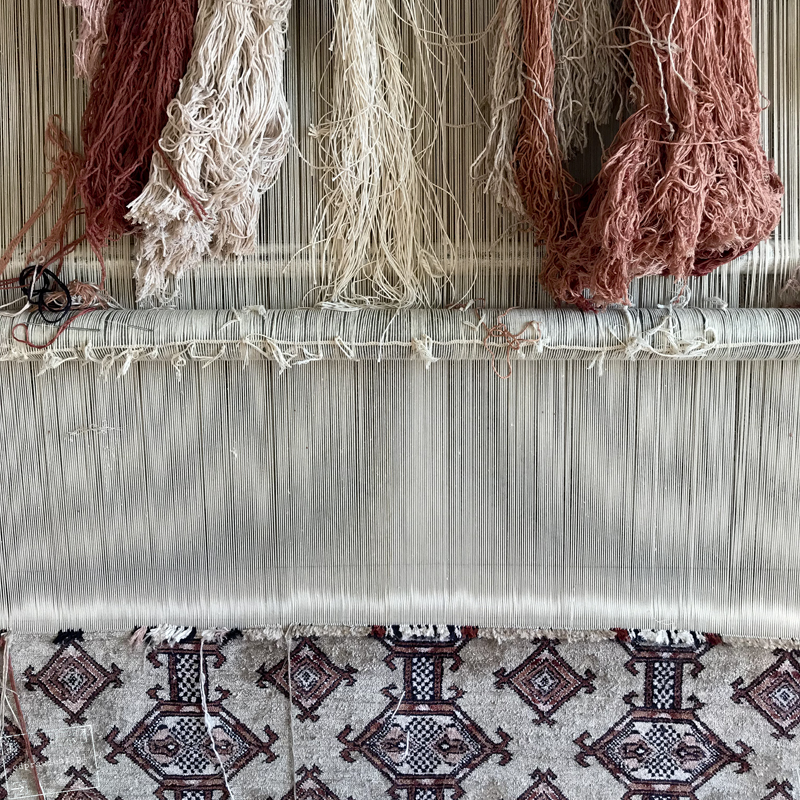 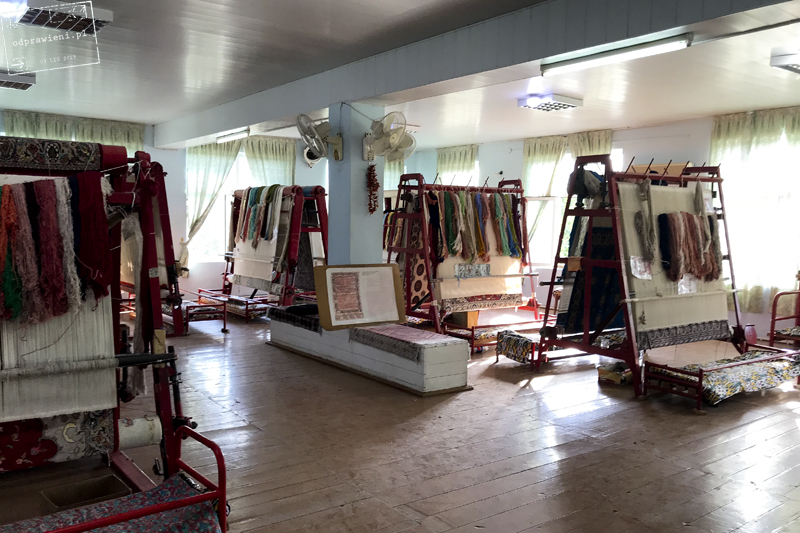 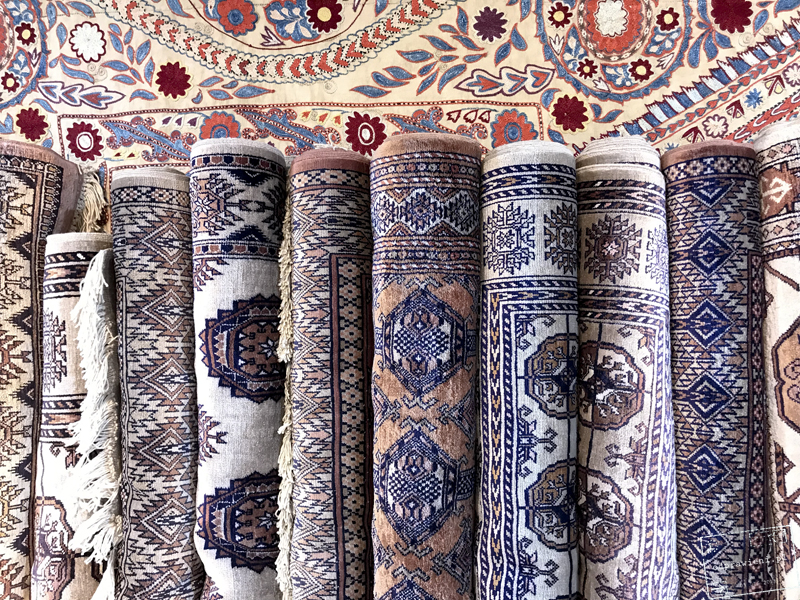 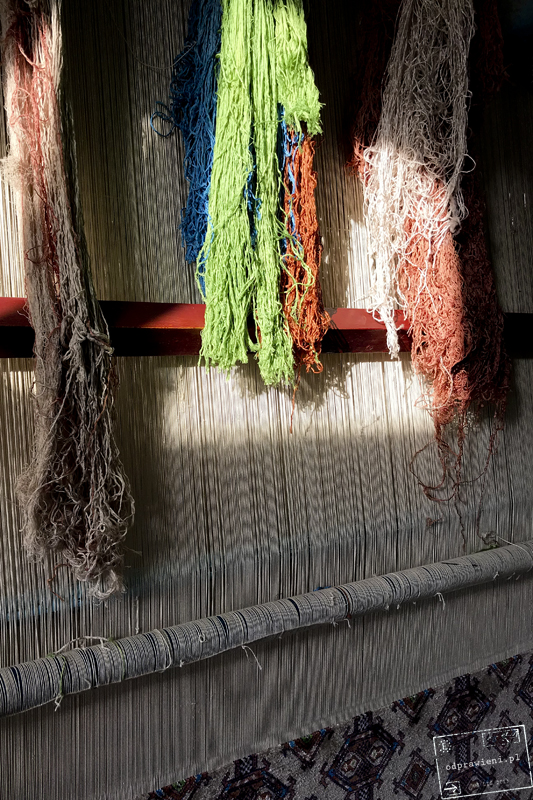 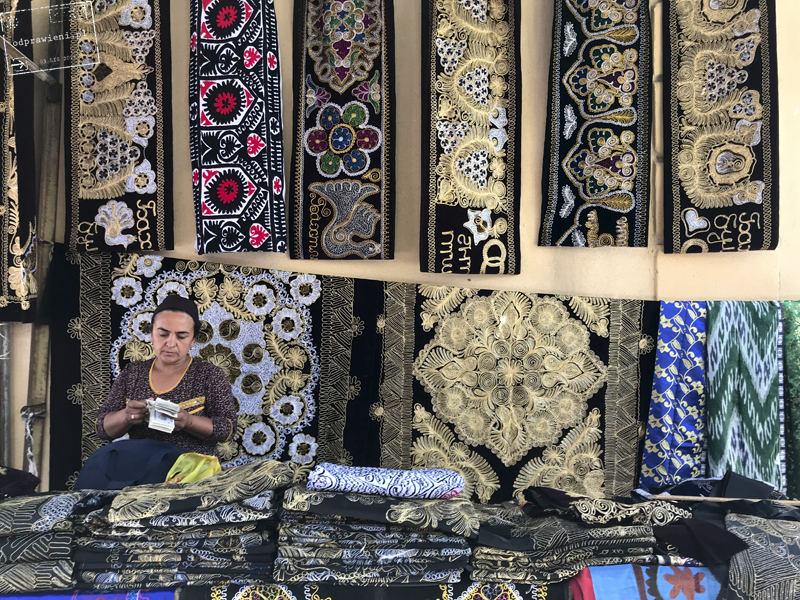 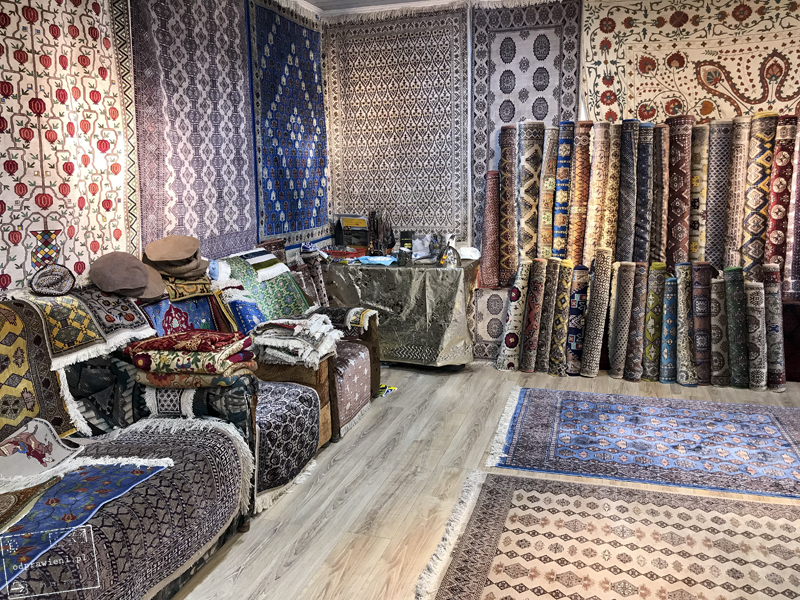 *Text written by us was also included in a guidebook published by Bezdroża Publishing House under the working title “Uzbekistan” First edition. Premiere of the book will take place in the first quarter of 2019!

GO TO MEET THE UZBEK GALLERY